Woman on the street 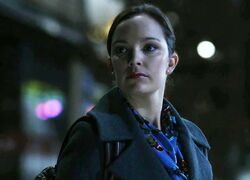 Peter Friedkin was going to push her in the street when a truck approached but he couldn't bring himself to kill her and the woman is still seen on the pedestrian way safely. Peter attempted to kill her as he wanted to steal her life for his own survival, according to William Bludworth.

Retrieved from "https://finaldestination.fandom.com/wiki/Woman_on_the_street?oldid=84866"
Community content is available under CC-BY-SA unless otherwise noted.