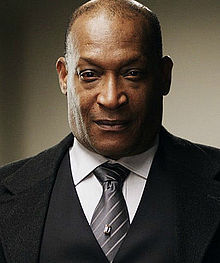 William Bludworth is a main character in the Final Destination series. He is a mortician and the owner of Bludworth Funeral Homes. Bludworth has the most knowledge of Death and its forces and capacities. First appearing in Final Destination, he's become one of the most popular characters in the franchise.

Bludworth was born on October 31, 1954 in New York. He is mysterious, agitated, and imminent to some of the survivors when they evade Death. He works as a mortician in Bludworth Funeral Homes and has some currently unrevealed, heavily implied connection to Death. He speaks with an intimidating, ragged, baritone voice.

After the death of Tod Waggner, Alex Browning and Clear Rivers went to see his corpse at the morgue. Bludworth caught them in the act and asked why they came. He told them that they had cheated Death by getting off the doomed Flight 180 aircraft, but now Death has a new design for all of them. Offering his help, he explains to them about the rule of Death: those who cheat death will be revisited by Death once more to claim back their lives which should've been lost. He also tells them about Death's List, a list of the order of deaths of the survivors in the original incident, and how it will work on them once again. Finally, he states about how ruining the list can affect the remaining survivors.

One year later, Clear visited Bludworth again, along with Kimberly Corman and Thomas Burke, who survived the incident in Route 23. William, who cremates the body of the recently deceased Evan Lewis, only mentions to them that new life can defeat Death.

Originally thought that Isabella Hudson's pregnancy can give new life, Kimberly's second premonition revealed that she is the only one who can cheat Death.

After a complete absence from Final Destination 3 and The Final Destination, Sam, Molly and friends first encountered Bludworth at the North Bay Bridge Memorial where he told them that Death doesn't like to be "cheated". The second time they met was at Candice's death. They met him again at the scene of Isaac's demise, where he told them of Death's design, and by taking a life can they live, for they will receive the lifespan of the person they've killed, in turn scratch their name off Death's list and taking the lifespan of the other person.

Peter seemed to be the most willing to kill another person in order to save himself. When Bludworth meets up with the survivors of the Bridge Collapse, he says "I've seen this before", meaning that people surviving an accident are meant to die sooner or later. Later on, these events are revealed to have taken place before the first Final Destination. Soon after these events, he is promoted from "Undertaker" to "Mortician'.

Death of the Senses

Due to a usual coroner being on vacation, Bludworth (going by just Bill) was transferred to a New York morgue, just in time for Death to begin targeting a new set of victims who were supposed to die at the hands of a would-be serial murderer killed in self-defense by latest visionary Jack Curtis.

When Jack and his friend Officer Amy Tom stopped by the morgue to take a look at the corpses of first victim Chelsea Cox and the dead psychotic, Bludworth greeted them, and like he did for Alex, Clear, Kimberly, and Thomas, offered cryptic advice.