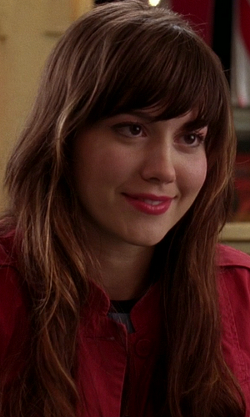 Wendy Christensen is the protagonist of Final Destination 3. She is the visionary and a survivor of the Devil's Flight roller coaster derailment as well as the visionary of the Train 081 crash.

It is unknown if Wendy is still alive. If she died, she would have been the tenth and final survivor of the derailment to die.

Wendy lived in McKinley, Pennsylvania, with her younger sister Julie. She attended McKinley High School, and was the school's yearbook photographer. She was also dating Jason Wise and was the best friend of Carrie Dreyer. Wendy and her sister Julie are of Danish and Norwegian descent.

Wendy Christensen visited the carnival with her boyfriend Jason Wise, best friend Carrie Dreyer, and Carrie's boyfriend Kevin Fischer for their senior class field trip. When they board the Devil's Flight roller coaster Wendy has a premonition that the roller coaster will crash, killing everyone on board. When she panics a fight breaks out between Kevin, and fellow students Lewis Romero and Ian McKinley. As a result several students are forced off the ride moments before the roller coaster crashes as Wendy predicted. The remaining passengers are killed, including Jason and Carrie, which leaves Wendy devastated.

Weeks later, Wendy, still distraught over Jason's death returns to McKinley High School one last time to pick up her diploma, having decided not to attend graduation. Before leaving she bumps into Kevin who tells her about Flight 180, but Wendy refuses to listen to him and drives off. When she returns home, she looks at the photos she took the night of the accident, and realizes that a photo she took of Jason foreshadowed his death.

After Ashley and Ashlyn die in a tanning bed accident, she tells Kevin about the photos. After the girls' funeral, they go to a drive-through where they try to find clues in Frankie's picture. While discussing how Frankie will die, a delivery truck backs up into the side of their car trapping them in the drive-through. While trying to get out of the car, a runaway truck rolls towards them, but they manage to escape through the windshield, just moments before the truck crashes into Kevin's truck, resulting in Frankie's death.

When she and Kevin look through the photos of the survivors once again, they realize that they had looked at the wrong photo of Frankie for clues. The next day they go to a gym to warn Lewis that he is next on Death's list, but he rudely rebuffs them before being killed by a damaged weight-lifting machine. They then visit Ian and Erin at the hardware store but he and Erin don't believe them as well. Wendy manages to save Ian, but Erin is killed by a nail gun, causing Ian to resent Wendy.

Wendy discovers that Julie was also on the roller coaster, along with another person that was sitting next to her, and contacts Kevin, who is working as security at the Tricentennial celebration, where Julie and her friends have gone. Kevin saves Julie from being impaled by a harrow that a panicking horse was going to drag her under. When Wendy asks Julie who was sitting next to her on the roller coaster her question is quickly answered when Julie's friend Perry Malinowski is suddenly impaled by a flag pole. After saving Kevin from an exploding barbeque grill, they almost manage to escape, but Ian arrives at the Tricentennial and blames Wendy for Erin's death. Wendy believes that Ian will cause her death, which he also comes to realize. During the standoff, a large container filled with fireworks go off in their direction, but they duck and they hit a nearby cherry picker behind Ian instead. As Ian shouts that Death cannot kill him, the cherry picker suddenly collapses and crushes him in half as Wendy, Julie, and Kevin watch in horror.

Five months later, Wendy is on a subway train with her roommate Laura and friend Sean, when she starts to see more omens, and encounters Kevin and Julie. Suddenly Wendy has another premonition in which the train's derails, killing everyone else on board. Wendy survives the crash, but ends up lying on the tracks with a broken leg.

Moment later, another subway train speeds towards her as she screams in terror and she is splattered by the train. When the vision ends, Kevin realizes that she just had another premonition and pulls the emergency brakes but to no avail and Wendy and Julie try to open the train door to escape. but the screen cut to black leaving their fate unknown.