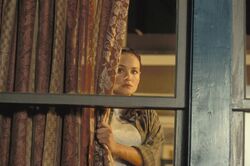 Ms. Valerie "Val" Lewton is a main character in Final Destination and is a survivor of the Volée Airlines Flight 180 plane crash. She taught at Mt. Abraham High School for 5 years as a Junior and Senior English teacher and French teacher and was one of the teachers aboard the plane.

Ms. Lewton is the third survivor of Flight 180 to die.

Ms. Lewton was born on June 15, 1970, in Mt. Abraham, New York. She is very intelligent, but is very sensitive, and snobbish. She took a degree in Education, as implied by her job in Mt. Abraham High School. Along with fellow faculty members and staff, she was chosen to chaperone the students on their field trip to Paris. She is shown to be the most affected after the plane explodes.

After Hare Krishna gave Alex a booklet, Ms. Lewton shouted at him and told Alex to move along. Later she broke up a small fight between Tod and George. She also asked where Billy was as the other students boarded the plane. After Alex had a premonition that the plane would crash, he panics, and a fight erupts between him and Carter. The Co-Pilot kicked off the students who were on the corridor at the moment, and Ms. Lewton volunteered to stay behind and look after the students who were kicked off. She convinces Mr. Murnau to get back on the plane, but after the plane explodes, Ms. Lewton becomes extremely guilt ridden over Mr. Murnau's death.

At the memorial, she snaps at Alex, who she held personally responsible for the plane explosion. Days later, she went to a coffee shop where she witnessed a bus suddenly hit and kill Terry Chaney. Following these events Ms. Lewton decided to leave town to restart her life.

While packing her things, Alex arrives at her house to warn her that she is next on Death's list, but she suspects that Alex is up to no good and contacts FBI Agents Weine and Schreck, who take him in for questioning.

After Alex is taken away, she prepares hot water for tea. When she sees the school logo on the ceramic mug, she panics and throws the water out. She instead takes vodka from the freezer and pours it into the same mug. However, she does not notice when the sudden temperature change causes the mug to crack.

She walks over to her computer, unaware of the trail of vodka she is leaving behind. She sets the cup down over the monitor while she is packing up her stuff. While she is packing, the vodka drips into the monitor's circuitry, short-circuiting the computer. Ms. Lewton notices her monitor smoking and investigates it. When she leans in closer, the monitor explodes, sending shrapnel into her neck. On impulse, she pulls it out and began to bleed heavily from the throat.

When she limps to the kitchen, the computer sparks, igniting the vodka trail behind her. She reached the kitchen, but the fire reaches the vodka bottle which explodes, setting the kitchen on fire and throwing her to the floor. She reaches for a towel on the knife rack but when she pulls it down, the knives fall onto her and one of them fell into her chest.

After being released, Alex arrives at her house and finds Ms. Lewton on the kitchen floor. But before he can help her the oven explodes, causing a chair to fall on top of her pushing the knife deeper into her chest, killing her. The fire spreads throughout the house, and Alex manages to flee as her house explodes.

Ms. Lewton was mentioned in Final Destination 2 by Route 23 pile-up survivor Eugene Dix. He reveals that after Valerie's death he was transferred to Mt. Abraham High School, and his substitute was later killed by a homicidal student.

Ms. Lewton is seen being thrown off of Flight 180 moments before it explodes.