Back to page
Add topic

Hi FaNbOy1988, I cant understand one thing: In Sam's Vision all except Isaac exit Bus, Candice falls from bridge and impaled in sailing boat, Molly,Sam and Peter runs, bus fall in water with Isaac but when part of bridge falls there are only Sam and Molly but no Peter. He run to Sam before bridge fall. Why?? Please answer me. (Matthew Bowyer Fan (talk) 01:52, December 23, 2014 (UTC))

Hi, welcome to Final Destination Wiki! Thanks for your edit to the Sam Lawton page.

I believe it's mainly because FD5 had only put in unused archival footage from the first movie which didn't include that line. Even though Warner Bros. had made New Line Cinema a subsidiary around 2011, it's possible that they weren't allowed to use the complete footage of the first movie in the final print of FD5 for various budgetary or legal reasons.

Hi FaNbOy1988 in Robert Johnson page is that Robert was never seen on the bus but he was seen from exterior. But for example I not see Debbie White in bus.

Hey, I looked at this photo for reference and a few of the employees I recognize on there are Armond Babian (seated in front of Olivia), David Buckler (seated behind Molly), the guy on the left side of the bus all the way in the back might Richard Sanchez, the two guys in the far back on the right side are possibly Trevor Winn and Chris Boylan , judging by the hair the person seated behind David Buckler is eithier Stacy Nadu or Kelly Gaither and finally the woman two seats up behind Sam Lawton is possibly Jennifer Alcott. FaNbOy1988 (talk) 01:10, December 24, 2014 (UTC)

Also Second Guy (dark skin) is on memorial board as Trevor Winn. 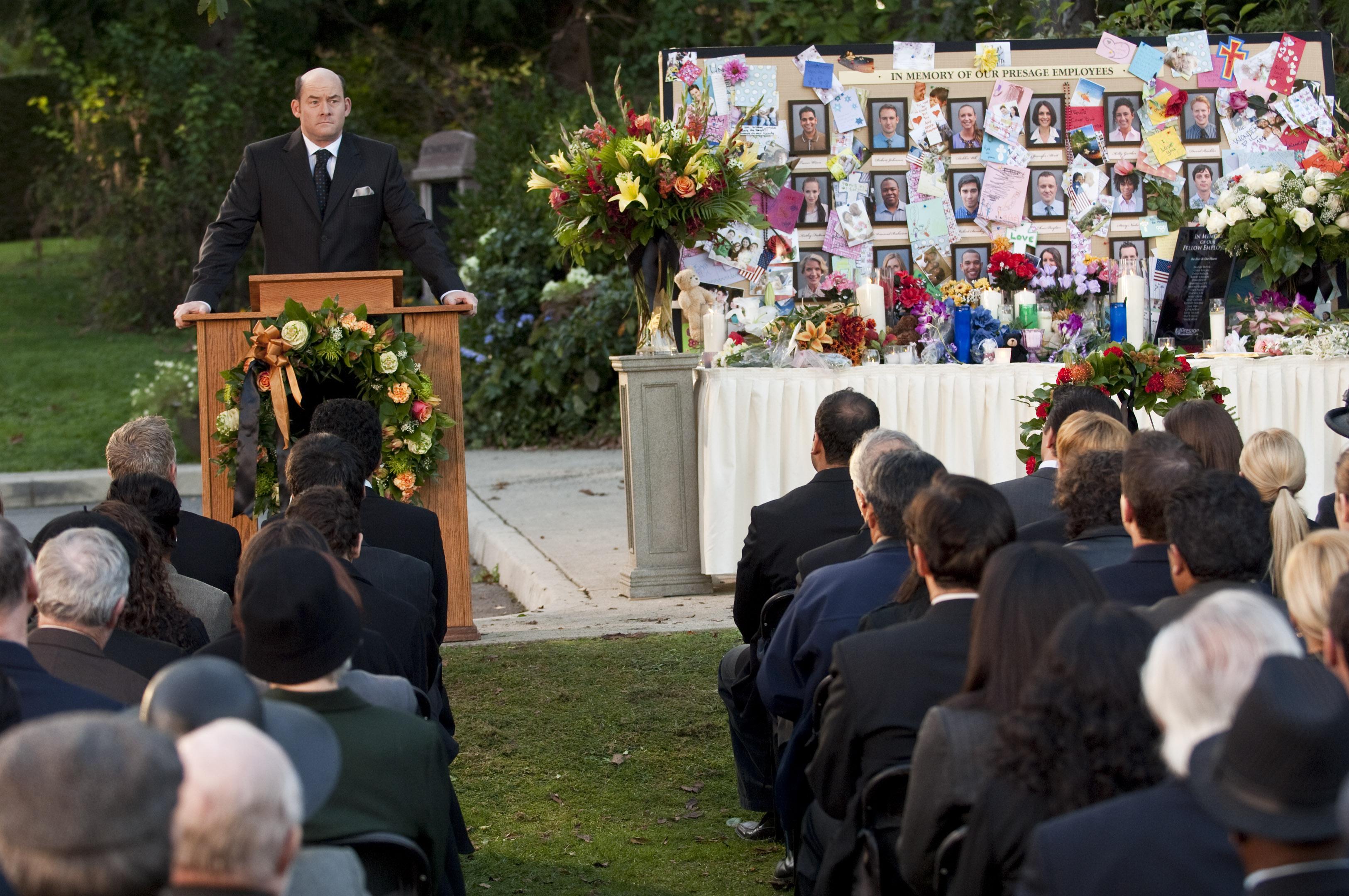 My guess is that it was a matter of simple error on either the part of Dennis himself or someone who reported the casualties to him. Just comes to show you how valued he was among the company.

Hi, why Kelly did not survive collapse of North Bay Bridge? In widescreen it is not seen but in fullscreen is interesting thing. See for yourself.

Who knows, perhaps that is what Death had set for her despite being seemingly safe. Maybe if we look closely we'll see that Kelly didn't make it out ok. FaNbOy1988 (talk) 04:30, September 2, 2015 (UTC)

You think that maybe that she get from bus but was separated from Last Group: Dennis, Olivia, Isaac and Nathan? Separated by cars, breaking part of bridge between danger part and safe part of bridge? So she had theoretically good time to escape but cars blocked her route. (Matthew Bowyer Fan (talk) 11:18, September 2, 2015 (UTC))

Hi FaNbOy1988, I cant understand one thing: In Sam's Vision all except Isaac exit Bus, Candice falls from bridge and impaled in sailing boat, Molly,Sam and Peter runs, bus fall in water with Isaac but when part of bridge falls there are only Sam and Molly but no Peter. He run to Sam before bridge fall. Why?? Please answer me. (Matthew Bowyer Fan (talk) 05:09, September 3, 2015 (UTC))

I need something from you. Do you have Blu-ray? If yes, I need this screen in Blu-ray quality. But on exactly on this shot not another. There must be This presage employee.

I don't have the movie on blu-ray nor do I have a photo but I watched this high definition youtube video of Sam and the others right after his vision. Look toward the back of the bus and cross reference that with her wiki page. I'm pretty sure it's her. FaNbOy1988 (talk) 03:32, September 8, 2015 (UTC)

That one I think is seen only in one shot and it is error. See here.

It's does look like a male, a blonde one. However, this all just seems to be a series of minor shot continuity errors. In one shot it's Kathy, in another, nobody's there and now we have this mysterious blonde dude. The scene where Issac goes to the bathroom to continue his conversation over his cell phone, it was definitely Kathy sitting there, but as Sam starts having this premonition, someone else is there. I know this isn't much help.

This is not Debbie, that not?

And this is also Debbie?

See for yourself. Link: 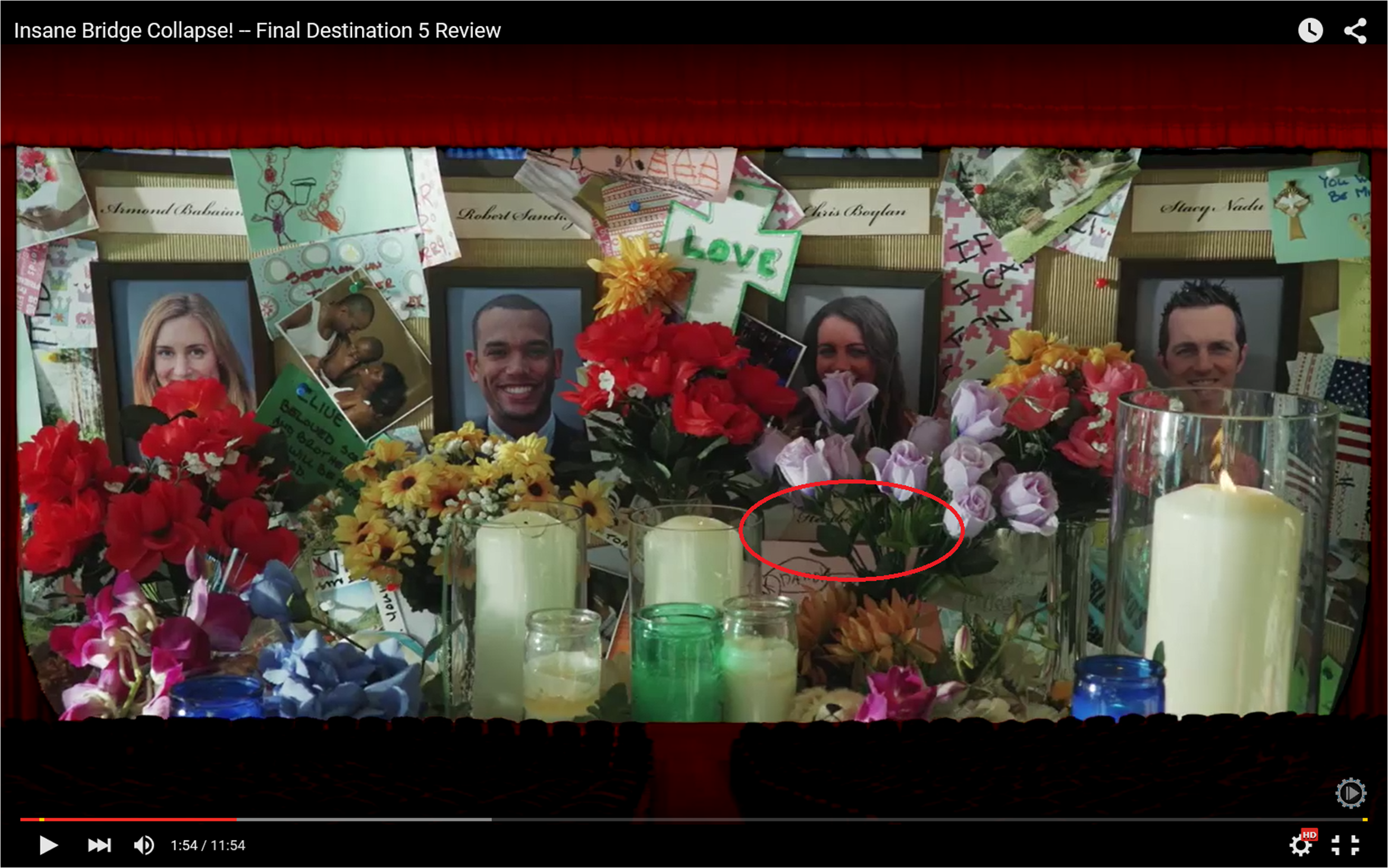 Hi maybe Kelly did not get from bus she maybe only get to bus's door although it was open Death maybe make invisible barrier. Is it possible? It maybe explains that in vision fall Bus single at the beginning of vision and in reality falls bus with last falling part of bridge. Death maybe want kill all of them inside. I am asking because when you see on photo bottom behind Dennis is no one from 17 Presage Employess.

It might be, Death seems powerful enough to do so. She might have also ran out of frame; like I said that scene has a lot of minor shot continuity errors. Plus Kelly isn't one of the primary characters the film focuses on. FaNbOy1988 (talk) 00:04, September 19, 2015 (UTC)

Hi do you thing that Armond survive in vision?

Probably not, my guess is that if Armond was killed through Sam's intervention, then Death would've had one less person out of Sam's group of friends to go after. I'm mainly referring to Bludworth's advice regarding how Death's "books have to balanced", If someone died when they weren't supposed to then someone has to live in that person's place. I could be completely wrong, the point is Armond most likely didn't survive in Sam's premonition. FaNbOy1988 (talk) 00:10, September 20, 2015 (UTC)

And these two? One of them is Richard Sanchez and other is either Bradley Breyer or Bruce Higgs. Do you think Sam helped them and they survive before Sam helped Olivia?

They couldn't have survived as all 3 were among the casualties of the bridge collapse nor do I think Sam tried to necessarily help any one of them in his vision. FaNbOy1988 (talk) 00:02, September 21, 2015 (UTC)

Gosh, there are so many throughout the film series, naturally each film always has at least one hottie (Hollywood). For starters, in Final Destination, I've always had eyes for the gorgeous Clear Rivers (Ali Larter) ever since Varsity Blues and I always thought both Ms. Lewton and Terry Chaney were just beautiful. I had the absolute biggest crush on Kimberly Corman (A.J. Cook) from FD2 back in 2003. FD3 had me starring at Wendy and Julie Christensen, Ashlyn Halperin and Ashley Freund, as well as Erin Ulmer. I was attracted to Janet Cunningham, Nadia Monroy, Samantha Lane (Baywatch hottie Krista Allen), and especially, Lori Milligan from The Final Destination. And finally for FD5, I couldn't stop gushing over the sweet and beautiful Molly Harper (Emma Bell), Candice Hooper (Ellen Wroe) is really, really cute to and, of course, I couldn't help getting excited whenever Olivia Castle came on, even though she was a bitch.

If you write your email, I was make from several film pictures of my favourite woman (I still working on it). But I can't add it here as this wikia is only about Final Destination. :) (Matthew Bowyer Fan (talk) 07:34, September 28, 2015 (UTC))