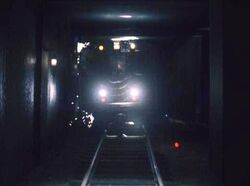 Train 081 is a subway train in Final Destination 3 that Wendy, Kevin, Julie, Sean and Laura were riding, which also derailed towards the end of the film.

While stopping at a station, a man throws a half-eaten chocolate bar at a trash can, but misses and it drops to the ground. The wind from the passing trains causes the bar to fall on the tracks, where a rat finds the bar and begins to eat it. The track is switched over so that the train may safely pass. While eating the chocolate bar, the rat accidentally touches two electrical contacts that control the switchover mechanism, completing a circuit and switching the track back to its original position and unaligning it.

The train immediately drives over the unaligned tracks and begins to derail, hitting the tunnel walls and several girders in the tunnel, splitting the train apart car-by-car. During the derailment, Julie is thrown to the back of the Train, and witnesses many cars crashing. The back end of the train is hit by a car, and is destroyed, forcing Julie to stay in the back. Julie struggles to make it to the front of the train, but a dislodged train wheel knocks loose, strikes Julie and projecting her out of the train, killing her.

The train begins to grind against the wall and Kevin is thrown against a cracked glass window. Unable to move, Kevin lies on the window until it breaks and he screams as he is sucked outside and crushed between the wall and the train itself. The remaining car runs into a girder and throws Wendy outside and onto the tracks, where she breaks her leg and is stuck onto a set of adjacent tracks. As she looks at the wreckage and her bloody broken leg she begins to cry, she hears faint screeching in the distance.

To her horror, another train is on the tracks and heading right for her. As she screams and knows she's seconds away from dying, she wakes up and realizes she's standing on the train, safe and sound alongside Kevin and Julie. When she warns them that the train is about to derail, she and friends desperately try to escape, but it's too late. The train is already in motion. The screen goes black and loud metal screeching can be heard shortly before the credits roll.

Retrieved from "https://finaldestination.fandom.com/wiki/Train_081?oldid=93568"
Community content is available under CC-BY-SA unless otherwise noted.