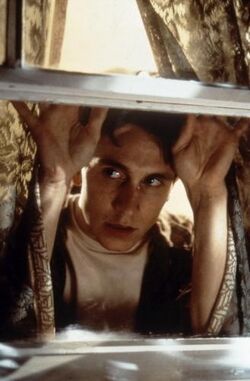 Toddy ''Tod Waggner is a main character in Final Destination and a survivor of the Volée Airlines Flight 180 plane crash. He is the best friend of Alex Browning.

Tod was born on November 15th, 1982 and lived in Mt. Abraham, New York with his parents, Jerry and Linda, and older brother, George. He and George have been friends with Alex since childhood, and have also been his classmates' since then. He was shown to be gullible and barely phlegmatic. Tod attended Mt. Abraham High School, and was one of the students qualified for the school's annual field trip to Paris.

Tod, along with George and Alex went to John F. Kennedy Airport by Mr. Waggner's car. Mr.Waggner gave George some cash as a surprise and he didn't share with Tod, which sparked a small fight broken up by Ms.Lewton. Later Tod asked Alex if he could go with him to the restroom. Alex asked him why and he tells him about his plan to hook up with Christa and Blake on the plane. Alex agrees and they go to the bathroom where Alex hears Rocky Mountain High playing on the speakers. Later, Tod boarded Flight 180 with Alex and pushed him along several times, because Alex repeatedly stopped, after having a feeling that something bad was going to happen. He stared at Alex in anger when he sat next to him, because now he couldn't initiate his plan with the girls. After Alex had a premonition that the plane would explode, George instructed Tod to go check on him, and Tod witnessed the plane explode shortly afterwards.

After the fight between him, Alex and Carter, Agent Weine and Agent Schreck interrogated the survivors. Tod nearly cried when he realised George died. Then his parents came and picked him up. The Waggners blamed Alex for George's death and Tod's friendship with Alex became distant. A month after the incident, he gave a farewell speech at the memorial service for the Flight 180 victims, where he also made plans to go on a trip with Alex after his father got over George's death.

The day later, at night, while Tod is in his bathroom, his toilet leaks. When he finishes, the water flows across the floor and almost makes him slip several times. While Tod takes the clothes off a clothesline over the bathtub, he slips on the puddle from the toilet leak, falling into the bathtub as the clothesline coils around his neck.

Tod struggles to get up due to the shampoo and conditioner spilling into the tub as the wire begins to tighten around his neck and slowly begins to suffocate him. He desperately attempts to reach for a pair of scissors on top of the sink. When he is unable to reach them, Tod attempts to untie the wire but dies from asphyxiation soon after. After his body goes limp, the water slides back across the floor and under the toilet, covering Death's tracks.

When his death is ruled a suicide, the Waggners blame Alex, believing that Tod killed himself because of his guilt over George's death.

Tod was mentioned in Final Destination 2 by Kimberly Corman, a survivor of the Route 23 pileup. She reveals that one day she went to a mall with her mother and was following her to the parking lot, but got distracted by a news report on Tod's death. Meanwhile, her mother was shot by thugs who attempted to steal her car, and had Kimberly stayed with her, she most likely would've been killed as well.

Tod is seen briefly in the events of Final Destination 5 before the Flight 180 explosion.