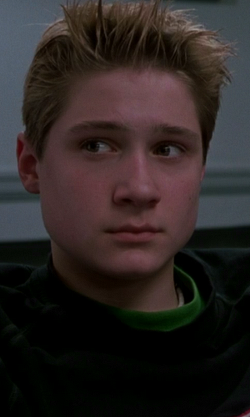 Timothy "Tim" Carpenter is a main character in Final Destination 2 and is a survivor of the Route 23 highway pileup. He is the teenage son of Nora Carpenter.

Tim is the second survivor of Route 23 to die.

Tim was 15 year old boy living in New York with his mother Nora. He and his mother share an overprotective Mama's boy bond, ever since his father died four years earlier.

Tim and his mother were on their way to the the dentist when, Kimberly Corman has a premonition that a pile-up will occur on route 23. She blocks the road, preventing the other drivers from entering the highway, and he and his mother witness the accident occur moments later.

They are later brought to the police station where they learn about the curse of Flight 180, but Nora dismisses this and leaves with Tim. That night, Tim is still a little concerned about what the other survivors said but again his mother dismisses it. The next day, Tim goes to the dentist with his mother, and becomes nervous. The dentist mentions Tim's smoking habits and then finds a cavity which needs to be drilled. During the drilling, pigeons continue to fly into the window, and the dentist decides to give him laughing gas instead. When another pigeon flies inside the lobby, the dentist leaves Tim unattended. While Tim is unattended water falls into the electric socket of the tank mixing oxygen into the laughing gas, meaning the laughing gas would be pure when he breathed it in. Suddenly a plastic blow fish falls inside Tim's mouth. This left Tim in a conundrum where he couldn't intake oxygen, if he took a breath through his nose he would inhale more laughing gas and make him lose more consciousness and he wasn't able to breath oxygen through his mouth nearly suffocating him until another dentist arrives.

After leaving the dentist's office Tim and his mom begin to walk into the streets. While walking, they see Kimberly and Officer Burke running towards them, with Kimberly screaming out "Pigeons!"

Tim notices a flock of pigeons in front of him, and on impulse, he runs up to the birds and starts scaring them away.

Some of the birds fly above a construction worker in a crane, and he accidentally hits a lever with his elbow, causing a heavy glass pane to fall onto the street below. When Nora tries to save him, a construction worker pulls her back, saving her. Tim looks up as the pane falls on him, and crushes him to death.