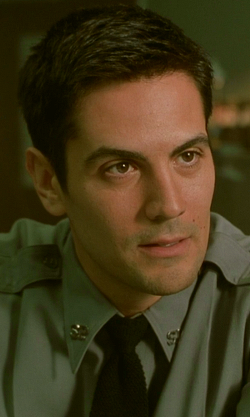 Thomas Burke is a main character and the deuteragonist of Final Destination 2. He is a highway patrol officer, and a survivor of the Route 23 pile-up.

If the DVD bonus of Final Destination 3 is considered canon, Thomas was the eighth and final survivor of Route 23 to die.

Thomas was born on April 13, 1975 in White Plains, New York. He resided in Westchester County, and is one of the stationed police officers in the Route 23 sub-station. Besides highway patrol, Thomas also performs secondary tasks such as police investigation and crime scene cleanup. During a stake-out with his partner, Thomas was reassigned to clean up the remains of Billy Hitchcock, avoiding a fatal shoot-out which took his partner's life.

When Kimberly Corman stalls her SUV in the middle of the road after having a premonition of a pile-up on the highway. The drivers behind her, including Burke, complained about her interruption until vehicles ahead crash one another and explode on the highway. As a result, Kimberly is later interrogated by Burke at a police sub-station, where Kimberly explained that her vision was very similar to Alex Browning's vision, and that they are now all on Death's List.

Burke and the other survivors disregard this until survivor Evan Lewis dies the next day, alarming the survivors about the incoming danger. After researching the Flight 180 disaster, Burke willingly agrees to help Kimberly save the group from death, now with the aid of Clear Rivers, the last survivor of Flight 180.

At Clear's suggestion they meet with mortician William Bludworth, who helps the latter by telling her new life can defeat Death. Kimberly believes that pregnant survivor Isabella Hudson can save them, however this proves false since Isabella was meant to live even in the premonition.

After Clear and Eugene's deaths, Kimberly sacrifices herself for Burke' safety by driving a van into a lake, however Burke rescues her and sends her to a hospital for recovery where she is revived and granted new life. This completely ruins the design and saves her and Burke. Having finally cheated Death, they go to a picnic with the Gibbons family, who tell them how their son Brian Gibbons was saved from Death by one of the survivors. To everyone's surprise, Brian is incinerated nearby due to a barbecue grill malfunction.

It is likely that Thomas still works as a highway patrol officer after cheating death with Kimberly.

A newspaper clipping shows that five years after Brian Gibbons' death, Burke went to a hardware

store to buy supplies, and met Kimberly inside. As they greeted each other, an unmanned vehicle began to drive down the road until it crashed into the store, nearly killing Kim and Burke.

They rushed outside the back door at the last minute only to come into contact with a woodchipper, which failed to shut off. Kimberly got her coat caught inside the machine and was slowly sucked in. Burke tried to save Kimberly, but in the process, he got caught in the machine too. Both of them were hacked to bits by the woodchipper, their blood splattering all over the wall.

The newspaper article on his death:

The scene that reveals their deaths is only featured as an optional part of the Choose Their Fates special feature on the "Thrill Ride DVD Edition" of Final Destination 3, that allows the viewer to choose between variations of scenes playing out, which can result in a substantially different viewing experience.