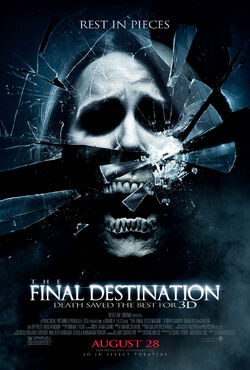 The Final Destination was rated R in the United States by the MPAA for strong violent/gruesome accidents, language and a scene of sexuality. In the United Kingdom, it was rated cert 15.

Eight years after the explosion of Flight 180, seven years after the Route 23 pileup and three years after Devil's Flight derailment, college student Bobby Campo has a premonition of a car crash while watching a race at McKinley Speedway for a study break, which sends debris into the audience, crushing some spectators and resulting in the stadium partially collapsing, killing almost everyone present in the 180 section. In a panic, Nick convinces his girlfriend Shantel VanSanten, and friends Nick Zano and Haley Webb to leave, with the quartet being followed by a handful of others who become angry with Nick after he pushes past them to escape. A security guard named Mykelti Williamson intervenes when everyone begins to argue outside, just as the catastrophe Nick had foreseen occurs.

Minutes later, a flying tire comes out and obliterates Nadia Monroy. After a memorial service at McKinley Speedway, Justin Welborn attempts to burn a cross on George's front lawn but his plan backfires, he is set on fire and violently dragged down the street by his own tow truck, he is then blown apart by it with his blown off head lands right next to George who goes to see what is happening. The next day Krista Allen is killed when a lawn mower rides over a rock, thrown in its path by her sons which is then shot right through her eye. Before their deaths, Nick had seen omens of clues how they would die.

Hearing about Carter and Samantha's deaths on the news, Nick and Lori begin doing research, and learn about the disasters that occurred in the previous films (The Collapse of the North Bay Bridge, The Explosion of Flight 180, The Highway Pile-up of Route 23, and The Rollercoaster Derailment of Devil's Flight) and discover that the survivors (Sam Lawton, Alex Browning, Kimberly Corman, Wendy Christensen) who were saved by premonitions began dying in a series of improbable accidents shortly afterwards. While Hunt and Janet refuse to believe them, Nick and Lori manage to convince George that Death is after them and the trio begin trying to warn the other remaining survivors.

Nick, Lori, and George head over to Grandstate Customs to warn Andrew Fiscella that he is next to die. Andy fails to believe, but moments later he is struck by an oxygen tank, and diced into a metal grid fence. After Andy's death, Nick goes to save Hunt, while Lori and George go to save Janet. They are successful in saving Janet from a malfunctioning car wash, but Nick is too late to save Hunt when his organs are sucked out of his anus by a pool drain.

Nick then believes that saving Janet had broken the chain, and Lori and Janet celebrate by going to see Love Lays Dying in a mall. Nick then realizes that another survivor, Jonathan Groves was found in the debris of the racetrack, and rushes to the hospital along with George. They fail to save Jonathan from being crushed by an overflowing bathtub, and moments later, George is hit by an ambulance. Nick then realizes it's up to him to save the girls, and rushes to the mall.

Once Nick arrives, he has another vision showing him that Lori and Janet will die while watching the film in the shopping mall cinema after an explosion in a room behind the theater. Nick rushes to reach them, while Lori begins spotting omens warning her that the danger is not over. Once Nick arrives, he and Lori attempt to convince Janet to leave, but are unsuccessful in their efforts. Janet is killed in the explosion and Lori is crushed by the gears of a malfunctioning escalator while escaping. Nick then realizes that the event hasn't happened yet, and is able to save his friends by extinguishing the fire that would have caused the initial explosion.

Weeks later, Nick notices a loose pylon outside of their hangout and warns the workers about it before meeting Lori and Janet inside. Moments later he deduces that the mall disaster vision was merely a red herring meant to lead them to where they needed to be for Death to strike. At that moment, the pylon collapses, causing a truck to swerve and crash into the restaurant. As the final scene turns into a x-ray, Janet is shown to have been crushed under the tires while Lori's neck is snapped, decapitating her, and Nick is thrown into a wall, bashing his skull and jaw, sending one of his teeth flying into the camera before the credits begin to roll.

The opening credits of The Final Destination features some of the deaths in the past 3 films shown in  X-Ray version:

The actual deaths of Alex Browning, Carter Horton, Brian Gibbons, Tim Carpenter, and Lewis Romero are not shown as well as the Flight 180 disaster.

After the success of Final Destination 3, which was initially planned to be in 3-D,[1] Eric Bress wrote a script, which impressed producer Craig Perry and New Line Cinema enough to green-light a fourth installment. James Wong was on board to direct, but because of scheduling conflicts, he decided to drop out. Consequently, the studio executives opted for David R. Ellis to return because of his work on Final Destination 2, who personally accepted because of the 3-D.[2] For the 3-D, which is the same technology James Cameron used for Avatar, Perry said that he wanted it to add depth to the film instead of just "something pop[ping] out at the audience every four minutes."[3]

Although shooting was to be done in Vancouver, which was where the previous three films were shot, David R. Ellis convinced the producers to shoot in New Orleans instead to bring business in the city, and because the budget was already big.[4] The opening crash sequence at "McKinley Speedway" was filmed at Mobile International Speedway in Irvington, Alabama. Filming began in March 2008 and ended late May in the same year.[3] Reshoots were done in April 2009 at Universal Studios Florida.[5]

Producer Craig Perry presented clips of the film at San Diego Comic Con. Additionally, a number of video games feature The Final Destination posters: Saints Row 2 has posters around the city taped to walls and poles, Skate 2 features billboards with posters on them, and Mercenaries 2: World in Flames added billboards with the movie's logo in a content update. Tom Clancy's Rainbow Six: Vegas 2 also features the promotional posters hidden around certain maps with the main goal to find all of the posters for a chance to win $1,300.[6]

The film was released in 3-D as well as in conventional theaters on August 28, 2009, the same release of Halloween II. It was initially planned for an August 14 release.[7] It is also the first 3-D film to feature D-BOX motion feedback technology in select theaters.[8]

There are two different posters, one featured a skull face, and the other one is a cast poster.

Lori's nose and a little part of her lip can be seen in the breaking glass part, but her mouth, teeth and chin can be seen in the mist part in a skull version. Also, Lori's hair can be seen at the top of her head too. There also a tagline at the top of the poster: "Rest in pieces". The movie's name "The Final Destination" is under the skull face, with all capital letters. This poster is mainly in dark blue and black, except the skull face and Lori's face are obviously over white.

The second poster is a cast poster, which featured 5 characters, from left to right: Hunt, Janet, Nick, Lori, George. There are skull faces of the cast in the water shadow right under the cast. A race car with number 6 on it appeared up behind the cast, and another race car with number 10 on it also appeared right behind Janet and Nick. The cast are seen standing on a racetrack, and fences with lamp-posts can be seen at the background.

The tagline of this poster: "Rest in pieces" is as same as the one on the first poster, and both of them are also at the top of the poster. The movie's name "The Final Destination" is under the water shadow, with all capital letters. This poster is mainly in lighting blue and black, except the cast are in their normal color, but they still dressed up in similar color.

The film received mostly negative reviews by critics. As of August 29, it holds a 30% "rotten" rating on Rotten Tomatoes. There was general agreement that "The Final Destination is predictable, disposable horror fare".[9] Likewise, based on the 13 reviews collected, Metacritic awards the film an average score of 34 out of 100, which denotes "generally unfavorable reviews".[10]

Some positive reviews referenced its "OK sense of humor", "swift [progression]" and "effective opening sequence of racetrack destruction that puts its Fusion 3-D technology to good use."[15] "The Final Destination has some surprising sparks of life to it yet," says Dustin Putman of TheMovieBoy.[16] In addition, fans (as well as non-fans) of the series were nevertheless generally favorable of the film, due to the 3-D and the hype that built around it.

According to USA Today and Newsday, The Final Destination debuted as the top of the box office beating out Rob Zombie's Halloween II, by earning $28.3 million during its first weekend.[17] It is also topped the box office in the UK.[18] The film remained #1 at the box office in North America for two weeks. On September 11, 2009, it gained a little more than a million dollars and dropped to #7.[19] The film has grossed $66.4 million domestically, $119.3 million in foreign sales, and $186.5 million worldwide.[20][21]