Final Destination Wiki
Register
Don't have an account?
Sign In
Advertisement
in: Characters, Ran over, Deceased,
and 16 more 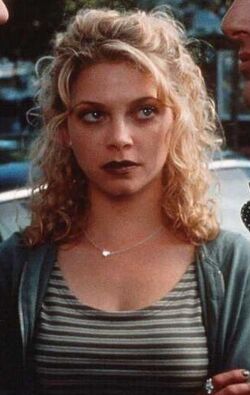 Theresa "Terry" Chaney is a main character in Final Destination and is a survivor of the Volée Airlines Flight 180 plane crash. She is the girlfriend of Carter Horton. Terry was among the senior students of Mt. Abraham High School to board the plane.

Terry was the second survivor of Flight 180 to die.

Terry was born on May 19, 1982 and lived in Mt. Abraham, New York, and attended Mt. Abraham High School. She is very sassy and snobbish but has a loving relationship with Carter which she hit, who she accompanies on their school's annual field trip to Paris.

Terry and Carter were first seen while they were walking inside the airport. Carter throws his bag to Billy and they laugh. Inside the airport, they sat and kissed. Later, Larry Murnau told the students said something in French, and Carter asked Terry ''What fuck does he want?''. After Alex had a premonition that plane will explode, a fight starts between him and Carter. The Co-Pilot kicks off the people who were on the corridor and Terry follows Carter off minutes before the flight explodes just as Alex predicted. Several minutes later, the parents came and took their child including Terry.

One month later, a funeral is held at the school for the victims. Carter wants to start a fight with Alex after the funeral but Terry stops him, and shows sympathy towards Alex for Carter's actions.

Later, while Terry and Carter are driving in his car they see Alex and Clear talking at a café. After Carter confronts Alex once again Terry follows him, fearing another fight and, pleads for him to stop. Billy and Ms. Lewton arrive at the cafe shortly after. When Carter instigates another fight, she loses her temper, and ends her relationship with Carter. She pushed Carter for bullying and beating up Alex. After reprimanding him for his constant fights with Alex then says the they could just drop f**king dead, she storms off and is immediately hit by a speeding bus, splattering the others with her blood.

That evening after Terri's death Carter returned to Mt. Abraham High School and attempted to add her name to the Flight 180 memorial with his pocket knife but was unsuccessful.

Terry is mentioned in Final Destination 2 when Thomas Burke researches the survivors of flight 180, and her mutilated body is seen in a picture.

She is also mentioned by Kat Jennings, a survivor of the Route 23 pile-up, who says that she was supposed to go to a bed-and-breakfast but after the bus she was on hit Terry, she decided not to go, and avoided a gas leak that suffocated the guests.

Terry is seen being thrown off of Flight 180 moments before it explodes.