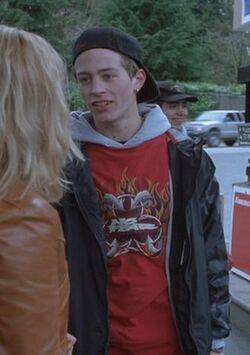 Skate Punk is a young boy who was smoking at a petrol station. He walked beside Clear Rivers, and the two had a little argument which made him called Clear a "B-itch".

It was because he was smoking in the gas station, that lead Clear to hit him for being stupid. He could have caused their deaths.

Clear ended up calling him "a little punk".

Retrieved from "https://finaldestination.fandom.com/wiki/Skate_Punk?oldid=83777"
Community content is available under CC-BY-SA unless otherwise noted.