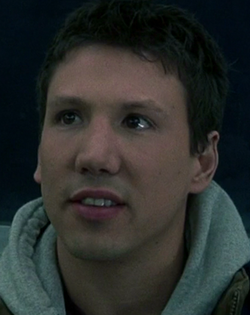 Sean is a character in the film Final Destination 3. He is possibly one of the fatalities aboard Train 081 and is the roommate of Wendy Christensen.

Sean is boarding the train along with his other roommate Laura when Wendy begins to see signs showing a forthcoming accident. Wendy begins to freak out and tells Sean and Laura to get off the train early, because she thinks it's gonna crash. Before she can, she run into her sister. As Wendy is about to introduce Julie to her roommates, Wendy is shocked to find Kevin on board too.

While riding the train, Wendy has a premonition of Train 081 derailing. After the derailment is over, the camera pans over to the inside of a wrecked car, revealing Sean and Laura's mangled corpses, indicating that they didn't survive. Wendy wakes up and informs Kevin about the derailment. Kevin pulls the breaks, but they do not work and the train continues to travel along the tracks. Shortly before the credits roll, loud crashing and metal screeching can be heard. It can be assumed (since the train didn't stop and Wendy saw several clues foreshadowing the derailment) that Sean died.

Retrieved from "https://finaldestination.fandom.com/wiki/Sean?oldid=94168"
Community content is available under CC-BY-SA unless otherwise noted.