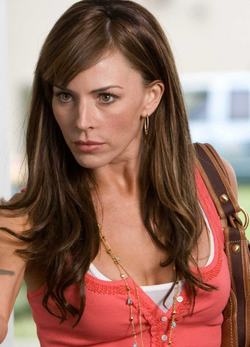 Samantha Lane is a survivor of the McKinley Speedway crash in The Final Destination.

She was the third survivor of the crash to die.

Samantha is of a British and Irish descent, and was born in Lakeview, New York, but lived in McKinley, Pennsylvania with her husband, and two sons.

Samantha is visiting the McKinley Speedway with her family when Nick O'Bannon has a premonition of a deadly race car crash. Before the premonition, Samantha put tampons in her sons ears, but despite their objections to block them from the noise. Hunt and Nick laughed at them. After the premonition, Nick panics and her sons followed him to the parking lot, and Samantha follows them with her husband before the accident occurs.

Samantha later visits the memorial service being held at the McKinley Speedway with her husband, where they thank Nick for saving their lives. Nick and Lori said they were not heroes, but Samantha and Edward disagree. Lori says they were happy because the couple were safe and they go their separate ways.

Days later, Samantha visits a beauty salon with her kids. Before she enters her kids start throwing rocks at a stop sign. As she is leaving her hair parlor, she was unaware that one of the stones landed in the grass near a man riding a lawnmower. The driver of the lawnmower runs right over the rock, and it is shot through the exhaust pipe. When Samantha is about to exit the salon she turns around and the rock shoots through her right eye and out the back of her head instantly killing her and breaking the window behind her. She collapses onto the floor, dead, as her children and the staff scream in horror.

Retrieved from "https://finaldestination.fandom.com/wiki/Samantha_Lane?oldid=94759"
Community content is available under CC-BY-SA unless otherwise noted.