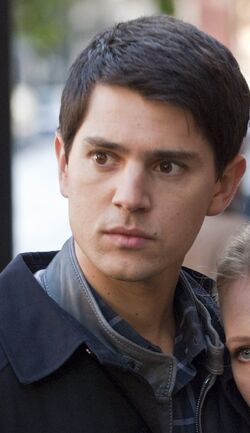 Samuel "Sam" Lawton is the protagonist of Final Destination 5. He is an employee at Presage Paper and the visionary of the North Bay Bridge collapse.

Sam was the seventh survivor of the bridge collapse to die.

Sam resided in New York. He works at Presage Paper as part of the local sales division. His sales for the last quarter are very poor, which causes him to reevaluate his future with the company. He dates Molly Harper and is good friends with and the subordinate of Peter Friedkin, and Nathan Sears. He also works part time as a Chef at a French restaurant called Le Cáfe Miro 81, and has dreams of going to Paris for his apprenticeship, although he is reluctant to take the position, because he doesn't want to leave Molly behind.

Sam and his co-works are on their way to a corporate retreat when Sam has a premonition that the North Bay Bridge will collapse, killing almost everyone on it. When he panics he convinces several of his fellow employees to leave before the accident occurs as he predicted. Later on, he is interrogated by Agent Jim Block, who initially believes Sam is a terrorist.

Some time later, he goes to the memorial service where he and Peter encounter a mysterious man who warns him that Death doesn't like to be cheated. Confused, he and Peter initially disregard this and walk away.

He returns to his daily life as an employee at Presage Paper.

Later on, Candice dies from a freak accident in a gymnasium. Sam visits Peter at the gymnasium where he spots the same man from the memorial service watching them from a distance. The following day at work, a depressed Peter invites Sam, Molly, Olivia, and Nathan to drink with him.

After Olivia leaves to go to the eye clinic, the others receive news that Isaac died during a massage treatment. They meet the same man once more, who tells him that if they want to live they must kill someone who was never meant to die on the bridge, and take their remaining lifespan. He and Molly decide to warn Olivia, suspecting she might be in danger.

They arrive at the clinic but are too late to save Olivia when she falls. Afterwards, Nathan accidentally kills his co-worker, Roy, in a warehouse accident, and takes his life. When Dennis arrives to question what happened, he is suddenly killed by a wrench launched by a belt sander.

Later on, Sam works at Le Cáfe Miro 81, and finally accepts the apprenticeship. After work, he asks his manager if he can reserve the restaurant for a date with Molly. Peter later shows up and talks about how he almost killed a woman by shoving her into traffic, but couldn't bring himself to do it. He then points a gun at Molly and they both flee to the restaurant's kitchen. Peter follows them and knocks out Sam and continues to pursue Molly. Fortunately, Agent Block arrives to help but is shot and killed by Peter. Peter continues to pursue Molly but is eventually stabbed in the back with a cooking skewer by Sam. Since Peter stole Block's life, and Sam killed Peter, this leads Sam to believe he was given Block's intended lifespan.

Two weeks later, Sam and Molly are boarding a plane to Paris. As they are taking their seats, Sam watches Alex Browning and Carter Horton fight and get thrown off the plane with several others.

When the plane takes off, Sam experience the same omens from he got on the North Bay Bridge. A flight attendant passes them, and a passenger asks what the earlier fight was about.

Then, the flight attendant explains that one of the passengers had a panic attack after claiming to have had some sort of vision. As Sam realizes this, the plane's left engine explodes and rips open the side of the plane. After failing to hang on to Molly, Sam is painfully incinerated in the Flight 180 explosion.