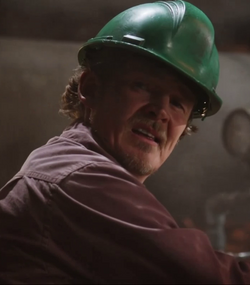 Roland "Roy" Carson is a character from Final Destination 5. He is a factory worker at Presage Paper, and union locale boss.

Roy resided in New York. He worked under supervisor Nathan Sears. He is resentful of having a much younger supervisor, resulting in an attitude dealing with Nathan, and knows that he can't be touched because he's the union boss. Roy has a hidden aneurysm that is likely to burst any day.

Roy also has a "dumbass" kid as well as a "whore of an ex-wife" who he mentions to Nathan right before his death.

Roy is first seen when Sam is looking on Nathan for their company retreat, Meanwhile he and Nathan had a heated argument and begin to fight but Sam and the other co-workers stop them. Then after Candice, Isaac and Olivia died in freak accidents. Nathan returns at the factory to work when he calls Roy. Nathan and Roy again begin to argue.

During an argument between Nathan and Roy over an offensive message sent to Nathan within the factory Nathan notices a lifting hook moving. Nathan tries to get both himself and Roy out of the way, but Roy thinks that Nathan is trying to start a fight, and resists. Roy is pushed backwards by Nathan as the faulty chain supporting the large hook collapses, breaking through the gridded walkway beneath his feet and causing him to fall.

As he falls, he clasps to the chain for support. Inches away from being impaled by a pole, he is caught on the hook. It turns out the hook has impaled him through the head, protruding through the back of his skull. This means Nathan has caused his death, giving him all of Roy's un-lived days.

Roy's aneurysm was suppose to have burst on May 13, 2000 right after Flight 180 explodes, had Nathan not interfered.