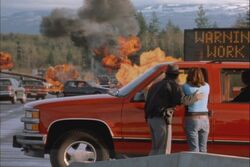 Route 23 is a highway located near White Plains, New York where a deadly multi-vehicle pileup occurred on May 13, 2001, killing 18 people. The disaster was caused by a logging truck that spilled its payload across the highway, causing a chain reaction of crashes.

The premonition begins when Kimberly Corman stops on the on-ramp, almost rear-ending the car in front of her. Her friends ridicule her for this mistake until a homeless woman pounds on her window at an attempt to collect empty soda cans to sell for cash. Kimberly and the ill-fated group who will soon avoid the disastrous pile up enter the highway.

As Kimberly drives on Route 23, she notices several omens that cause her to become more and more uncomfortable the further she drives down the highway, such as: ominous songs playing on the radio, seeing a child in a vehicle next to her replicating a head-on car crash with a model car and model red pickup truck (that looks eerily similar to the red SUV she is currently driving), witnessing a semi-truck driver drinking a beer, passing by a school bus filled with a high school sports team that chants "Pile up!", and noticing emergency signals lighting up on her car dashboard.

Just before the pileup occurs, Officer Thomas Burke drives in his patrol car behind a truck carrying heavy, thick logs. He notices a loose chain dragging along the road, distracting him as coffee spills onto his leg. The chains holding the logs on top of the truck's flatbed snap, and the logs fall off. Thomas is too distracted by cleaning up the spill before he looks up to notice a log bouncing up from the ground and heading straight toward his patrol car. The log bursts through the windshield, decapitating Thomas. Eugene Dix and Rory Peters see the accident and attempt to drive out of the way. Eugene's bike falls over and he is thrown against a log, where his motorcycle slides across the road and slams into his torso, crushing him.

Rory hits a log and his vehicle flips several times before finally landing upright in the middle of the road in the opposite lanes. Rory survives the rollover, but is not quick enough to avoid a garbage truck that ruthlessly plows into his car and kills him in a fiery explosion. Shortly afterward, Kat Jennings crashes head-on into a log, sending her SUV end-over-end and landing upside down on top of the log.

Nora Carpenter and her son, Timothy Carpenter, swerve across the road to avoid the logs and destruction, causing Tim to drop a water bottle onto the floor of Nora's seat. The water bottle rolls underneath the brake pedal and prevents Nora from stopping the car. She crashes her car into the same log that Kat crashed into, exploding on impact. Isabella Hudson, who is pregnant, drives a white van through the destruction, narrowly avoiding death when a log sideswipes her vehicle. The log truck ultimately jackknifes to a stop, leaving behind a path of destruction. Kimberly swerves to avoid a log and flips her SUV over it, rolling out of control and severely injuring herself and her friends Shaina, Dano, and Frankie before it lands on its left side. Evan Lewis, in his attempts to avoid crashing his car, collides with the gas tank of the log truck, exploding on impact.

To Kimberly's surprise, Evan is still alive and trapped in his car by his seatbelt, screaming as the fire burns his flesh away. Kimberly begins to cry as she watches Evan burn alive in the wall of flames. Suddenly, a truck carrying several cars jackknifes through the wall of flames and annihilates Evan. The truck careens toward Kimberly's car with no intention of stopping. Kimberly screams as the truck drives into her.

At that point, the vision ends, and Kimberly and her friends are still safe on the on-ramp. Kimberly freaks out after signs in her premonition come true, and ends up intentionally blocking traffic. Thomas comes by and questions her motives, where she begins to explain that a large car accident is about to occur. Shortly after Thomas asks Kimberly to step out of her vehicle, the log truck passes by and the accident occurs. Thomas retreats to call for help, but a moment later, he pulls Kimberly out of the way when the truck carrying several cars on its trailer rams into her SUV, killing Shaina, Dano and Frankie. Thomas holds Kimberly back as she cries hysterically over the loss of her friends.