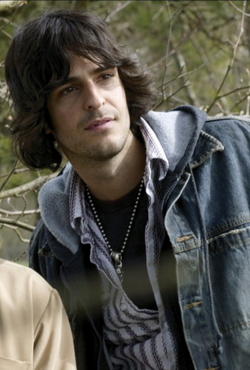 Rory Peters is one of the main characters in Final Destination 2 and is a survivor of the Route 23 highway pileup. He is a heavy drug user who survived the pileup.

Rory is the fifth survivor of Route 23 to die.

Rory lived somewhere in New York. Before the accident Rory traveled to Paris, France on a vacation. While there, he planned to visit a movie theater, but after witnessing Carter Horton's death, he decided to go home instead, and avoided his own death after the theater collapsed on the guests. Although Rory frequently underestimates the seriousness of the situation, among all of the survivors, he is the most helpful to Kimberly and Thomas.

Rory is driving in his car and taking drugs,also trying to hide them from Officer Burke when Kimberly has a premonition of a pile-up on Route 23 where Rory is killed by a Garbage Truck. She blocks the road to prevent the other drivers from entering the highway. Moments later the accident occurs just as Kimberly predicted and several other people are killed. Rory is later brought to the police station, where he jokes about the possibility of Death still coming after the survivors,joining Eugene Dix in his insensitive jokes,showing he doesn't believe Death is still after them. After Evan's death on the same day,Rory watched the news about it in TV while hooking up with his friends and becomes terrified,possibly thinking that Kimberly was right and Death is still after the survivors.

Later on, he attends a group meeting at Officer Burke's apartment withClear Rivers, who is explaining the remaining survivors Death's List and, while safe-proofing the house, he sees a shadow of what appears to be man with hooks, foreshadowing Nora Carpenter's death. After she is killed, the other survivors leave to find Isabella Hudson. Along the way, their car suffers a blowout and they crash onto a nearby farm.

Rory attempts to help out an injured Eugene until the paramedics arrive, and later saves a young man from getting run over by a speeding news van. Rory shows his serious side for the first time when he emotionally asks Kim to hide his drugs, and anything that would break his mother‘s heart if he dies. He then walks off to do more drugs. After Kat dies, she drops her cigarette and it rolls over into a trail of gas leading to the news van. When the fire reaches the van, it explodes and hurls a wired fence towards Rory. Just as he looks up, the wires slice through his body, cutting off his left arm shortly before his body falls apart into three pieces.