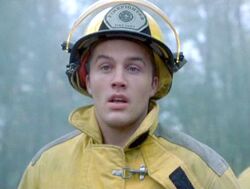 This rescue worker was sent to free Kat Jennings from her SUV when she became trapped in it after a crash. As he jammed a J.A.W. into the side door of the vehicle, Kat asked the worker to be quieter, but the worker quipped that he would "put it on quiet mode".

The worker jammed the device into the door again when he sees Kat starting to smoke (as it would explode the car) and the airbag deployed, sending Kat's head backwards. As the bag deflated, the fireman and the others saw a dislodged PVC pipe that nearly missed her during her crash protruding through her skull and forehead.

Because Kat was on Death's list, the worker was an unintentional Servant of Death.

Retrieved from "https://finaldestination.fandom.com/wiki/Rescue_Worker?oldid=92176"
Community content is available under CC-BY-SA unless otherwise noted.