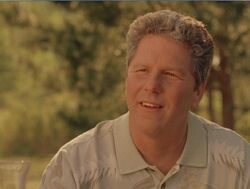 Peter Gibbons is a character in the film Final Destination 2. He is the husband of Mrs. Gibbons and the father of Brian Gibbons. He was at the Farm when Kat and Rory died and then,he was at movie’s ending. He witnessed Brian’s death. He also has a woodchipper (mentioned in an article) which sucked Kimberly and Officer Burke into it, however, this is non-canon.

Retrieved from "https://finaldestination.fandom.com/wiki/Peter_Gibbons?oldid=95267"
Community content is available under CC-BY-SA unless otherwise noted.