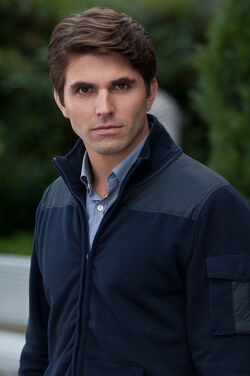 Peter Friedkin is a main character and the tritagonist in Final Destination 5 and is a survivor of the North Bay Bridge collapse. He is an employee at Presage Paper and the boss and best friend of Sam Lawton. After the death of his coworker and girlfriend Candice Hooper, Peter becomes emotionally unstable and later becomes the film's secondary antagonist.

Peter was the fifth survivor of the bridge collapse to die.

Peter lived in New York and worked as a middle manager at Presage Paper. He was dating Candice Hooper and was also good friends with Sam Lawton and Molly Harper.

Peter is on his way to a corporate retreat with his colleagues when Sam has a vision that the bridge they're crossing will collapse, killing everyone on it. Peter leaves the bus to go check on Sam just moments before the bridge collapses as Sam predicted, killing the remaining people on it. He later goes to memorial service for the victims where he encounters the mysterious William Bludworth, who warns him that Death doesn't like to be cheated, but Peter disregards his warning.

The next day, he goes with Candice to her gymnastics practice, where he witnesses her death. A devastated Peter returns to work, where he shares a drink with Sam, Molly Harper, Nathan Sears, and Olivia Castle. Afterwards, he learns about Isaac's death, and they all rush over to the Ming Yung Spa where they encounter Bludworth again. Bludworth explains that Death is still after the survivors and that if they wish to cheat Death, they must kill someone who was never meant to die on the bridge and claim their remaining lifespan.

After Nathan accidentally kills his co-worker Roy in a warehouse accident Peter, Molly, and Sam arrive. Peter deduces that he must have claimed Roy's remaining lifespan shortly before witnessing Dennis's death. Peter grows jealous that Molly was meant to survive the initial bridge collapse instead of Candice, who he believes deserved to live more than her.

Peter later interrupts a date between Sam and Molly and attempts to kill Molly, but when Agent Jim Block arrives he ends up killing Block instead. Nonetheless, he continues to pursue Molly to remove any witnesses. Just as he is about to stab Molly, Sam arrives and stabs him in the back with a large skewer, killing him, and adding Molly to Death's list.