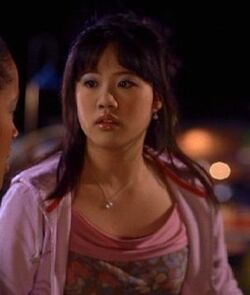 Perry Malinowski is a survivor of the Devil's Flight roller coaster derailment in Final Destination 3.

Perry is the sixth survivor to die.

Perry lived in McKinley, Pennsylvania, and attended McKinley High School. She was friends with Julie Christensen and Amber Regan. She is shown to be a quiet, non-spoken person. Perry is of mixed Polish and an unknown Asian descent.

Perry and her friends

visit the carnival for McKinley's grad night (despite being sophomores themselves) and board the Devil's Flight Roller coaster.

Before the ride starts Wendy has a premonition that the ride will crash. When she panics a fight breaks out and several people leave the ride, including Perry and Julie. Moments later the ride crashes as Wendy predicted, killing the remaining passengers on board. Perry is later seen at school signing yearbooks with Julie and Amber. She also attends the funeral for Ashley and Ashlyn, and later attend McKinley's tricentennial fair.

After Julie is almost killed by a horse, Perry and Amber rush to comfort her. Wendy rushes over as well and demands to know who sat next to her on the roller coaster, because they are next on Death's list. Perry looks at the others in horror, and slowly stands up realizing that she is next.

Suddenly the horse, who has been tied to a flag pole is frightened by the fireworks and runs off again, breaking the flagpole in half and launched it into the air. As Perry stands up, the flagpole impales her through her chest, spraying her blood all over her friends and killing her instantly. After she falls forward, her body slowly slides down the bloody flagpole.