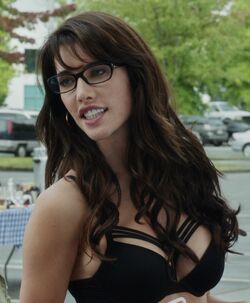 Olivia Castle is a main character in Final Destination 5 and is a survivor of the North Bay Bridge collapse.

Olivia was the third survivor of the bridge collapse to die.

Olivia lived in New York and was a provacative office assistant in the local sales division at Presage Paper. She is also the arch rival of Candice Hooper.

Olivia is on her way to a corporate retreat with her colleagues when Sam Lawton has a premonition that the bridge they are crossing will collapse, killing everyone on it. When Sam panics, she leaves the bus and witnesses the bridge collapse moments later just as Sam predicted.

She later meets up with the other survivors at the memorial service. During Dennis Lapman's speech, she can't help, but laugh at Isaac and Nathan's jokes even during such a sad occasion. After Candice's death, she returns to work and approaches Sam and Molly about the grievance pay. When they discuss Candice's death, Olivia makes an insensitive comment that shows her indifference towards Candice's death. Olivia then joins the others to have drinks before heading to the eye doctor.

When Olivia goes to have her eye surgery, her head is tightly secured and her right eyelid is pried open with a speculum. She squeezes a teddy bear out of nervousness, pulling off one of its eye's which falls on the floor. When the eye doctor sees there is missing file information he leaves to consult his secretary. A cup of water that Olivia left on top of a water cooler falls over when the cooler bubbles, and the cup spills onto the power unit of the laser machine plugged into the wall. The intensity of the ray increases and the laser machine starts to shake. As Olivia reaches for the emergency stop button on the control, she accidentally knocks it to the floor, and the activation button is pressed instead, discharging the laser into her right eye.

Sobbing in pain, Olivia manages to release her head from the clamp and gets off the table, before they arrive. However, being in high heel boots, Olivia trips over the teddy bear's glass eye on the floor and stumbles out the window, shattering it, and plummeting 4 stories onto a parked car's windshield below, instantly killing her. As Olivia's body drops onto the ground, her undamaged eye then rolls into the street and is soon run over by a passing car.