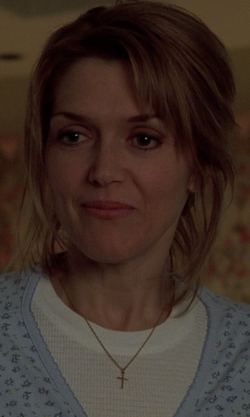 Nora Carpenter (née Kesner) is a main character in Final Destination 2 and a survivor of the Route 23 highway pileup. She is the widowed mother of Tim Carpenter.

Nora is the third survivor of the Route 23 pileup to die.

Nora resided somewhere in New York, with her teenage son Tim. She and her son had a very overprotective mother/Mama's boy bond ever since her husband died four years prior the accident.

Nora and Tim are on their way to the dentist when Kimberly Corman has a premonition of a pile up on Route 23. She blocks traffic, preventing the other drivers from entering the freeway. Nora wonders what is going on, and watches in shock as the crash occurs moments later. After the crash, she and her son are brought to the police station, where they learn about the curse of Flight 180, but Nora dismisses this and Eugene's "jokes".

That night, Nora tells her somewhat concerned son that it isn't true, and some people just need some 're-wiring'. The next day, she and her son go to a dentist's office for a routine check-up. While leaving Nora witnesses Tim's demise, short before Kimberly and Thomas arrived, which leaves her devastated. When the remaining survivors reunite for safety, Nora tells Kimberly that she no longer cares whether she lives or dies, before leaving to plan her son's funeral. She also gets some Valium from Kat before leaving the house. It's clear she resents Kimberly for causing her son's death.

While standing in the elevator with Eugene Dix and an old man carrying prosthetic limbs, Officer Burke calls her phone. Startled, she drops it, and bends down to pick it up. Burke tells her that a "man with hooks" is going to kill her. Unaware that her hair is tangled in one of the prosthetic limbs, she quickly attempts to leave the elevator, but the hooks hold her back, causing her to panic. Although Eugene and the man try to untangle her hair, she runs out of the

elevator, and the doors immediately close on her neck.