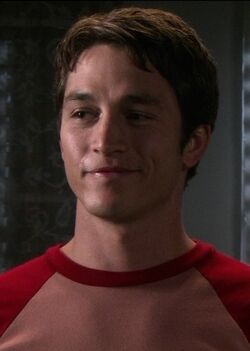 Nick O'Bannon is the main protagonist and visionary in The Final Destination. He is a college student from McKinley, Pennsylvania and a survivor of the McKinley Speedway accident.

Nick lived in McKinley, Pennsylvania, with his girlfriend Lori Milligan. He is also good friends with Hunt Wynorski and Janet Cunningham and they all attend the same college together. He has an Irish accent.

Nick and his friends visit the McKinley Speedway for a study break. When Nick has a premonition that a car crash will cause the speedway to collapse on the guests he panics and a fight breaks out between him and several other spectators, who follow him out of the stadium moments before the accident occurs. Once outside, the group witnesses Nadia Monroy's death.

Sometime later, Nick, Lori, Hunt and Janet go to a cafe, where they discuss what happend. After seeing the memorial at the McKinley Speedway on the news, Nick and Lori decide to go to pay their respects to the victims. There they meet security guard George Lanter, and are then confronted by Carter, who blames George for his wife, Cynthia's death. That night, as Nick and Lori sleep, Nick sees several omens.

The next day, Nick and Lori see a news report on Carter's death, and Nick notices the same signs from his vision he had the night before. After Samantha Lane 's death Nick and Lori explain to Hunt and Janet that Death is still after the survivors, but they don't believe them.

He and Lori go back to the speedway so Nick can remember what order the survivors died in, but they are caught by George. After explaining what is going on to George he shows them security footage of the accident, which helps Nick remember, and he deduces that Andy Kewzer is next. They go to a mechanic shop to warn him, but he is killed moments later in a freak accident. Nick, Lori and George then find out that Hunt and Janet are next. Lori and George race to a car wash and save Janet from obliterated by a rotating brush, but Nick arrives too late to save Hunt at a pool.

Later on, Nick and Lori visits George and find him trying to commit suicide. After he explains his many failed suicide attempts they believe that saving Janet ruined Death's plan.

Days later, Nick is preparing for a vacation, after Lori and Janet go to the mall cinema. As Nick packs his stuff, he sees a news report which reveals that another survivor named Jonathan Groves was rescued from the rubble, and realizes that the reason George couldn't kill himself was because he wasn't next on Death's list. He and George rush to the hospital, but they arrive too late and Groves is crushed by an overfilled bathtub that falls through the ceiling.

As they leave George is hit by a speeding ambulance. Nick rushes to the mall to save Lori and Janet, but Janet refuses to come with him, and is killed when the screen explodes. As Nick and Lori attempt to escape, Lori is pulled into a malfunctioning escalators gears. Nick realizes that this was just another vision, but is unable to save George. Nick rushes to a theater that is under construction, which is where the explosion starts and attempts to stop the fire, before the explosion occurs. He puts out the fire, but the ashes fly through the air and start another fire. A nail gun then falls off a table and shoot several nails into Nick's right arm. He tries to free himself, but to no avail. The trail of fire almost leads to a tank of combustible fluids, but Nick uses a long piece of wood with fire on it to set off the sprinklers and put out the fire.

Two weeks later Nick, Lori, and Janet go to a cafe, and Nick begins to see several more omens foreshadowing their deaths. He realizes that everything they've been through was just a feint meant to lead them to where they needed to be for Death to strike. As he relays this information to Lori and Janet, the scaffolding next to the coffee shop falls over and lands in the middle of the road. A truck swerves to avoid hitting it and crashes right into the coffee shop, running over Nick, Lori, and Janet. In x-ray format, Nick is hit with the side of the truck and launched into the wall, which cracks his skull, and dislocates his jaw. When his body falls to the floor, blood flows out of his mouth, and his teeth fall out.