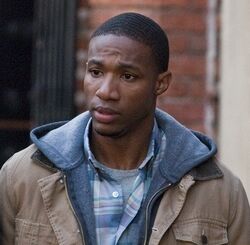 Nathaniel ''Nathan Sears is a main character in Final Destination 5 and is a survivor of the North Bay Bridge collapse.

Nathan lived in New York, and was a supervisor at the factory wing of Presage Paper. He would often get into fights with a factory worker named Roy and was good friends with Sam Lawton.

Nathan and his co-workers are on their way to a business retreat when Sam has a premonition that the bridge they're crossing will collapse, killing everyone on it. Nathan leaves the bus to check on Sam just moments before the bridge collapses as Sam predicted.

He later meets up with the other survivors at the memorial service for the victims.

At work, he joins Sam, Molly, Peter, and Olivia to share some drinks. Afterwards, they learn of Isaac's death and head over to the Ming Yung spa where they meet mortician William Bludworth. Bludworth explains that Death is still after the them, and if they wish to cheat death they must kill someone who was never meant to die on the bridge and take their remaining lifespan. Of all the survivors Nathan is the most skeptical, despite this he agrees with Molly that they should warn Olivia.

After Olivia dies, Sam realizes that Nathan is next on Death's list. Meanwhile, Nathan returns to the plant where he argues with Roy, and accidentally kills him by shoving him in front of a lifting hook that was meant to strike Nathan. When Sam, Peter, and Molly arrive he learns he claimed Roy's life, and they all witness Dennis's death shortly after.

Several weeks later, Nathan is at a local bar that is holding a memorial for Roy. There he meets a co-worker named John who reveals that Roy had a brain aneurysm that could have burst any day now. As Nathan realizes his life is still in danger, the landing gear from Volee Airlines Flight 180 crashes through the bar and crushes him, and his arm is sent flying at the screen.