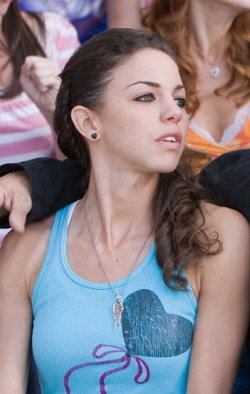 Nadia Monroy was a survivor of the McKinley Speedway disaster, she was the girlfriend of Andy Kewzer. Nadia survived the crash, only to be killed minutes after inside the parking lot. According to Nick's premonition, Nadia was supposed to be killed by a flying tire from one of the cars, but it didn't happen as she had left the stadium with Andy, thus putting her on Death's list. However, Nadia was killed by a flying tire outside the stadium, not long after she left. She is unique in that she escaped her planned death, thus putting her on Death's list as an illegitimate survivor, but she was still killed in the initial major disaster.

Nadia was the first survivor of the crash to die.

Nadia was born in McKinley, Pennsylvania, USA. She and her boyfriend Andy Kewzer watch the race at the McKinley Speedway and Nadia gets everything she asks for through her boyfriend Andy. Andy takes good care of her, and she supports Andy in return. She is of Spanish descent.

Nadia went to the McKinley Speedway with Andy to watch the race. She asked to uses Hunt's binoculars, but as he explained that they weren't really binoculars she took them and drunk from it. Then she says she can't see the race because of a couple sitting in front of them and Andy yells '' down in front asshole". prompting them to sit down. Nadia becomes happy and kisses him. After Nick has a premonition about the car crash he panics and gets into an altercation with Andy. Andy follows Nick and his friends out of the stadium and Nadia follows Andy to the parking lot. Suddenly the crash occurs just as Nick predicted.

Moments after the disaster in the stadium, Nadia reprimands the group for their actions by asking them if they all lost their "fucking" minds just before a tire, launched through the air by an explosion, obliterated her head and her upper-body, in front of Andy, George, Carter, Nick, Lori, Hunt and Janet.