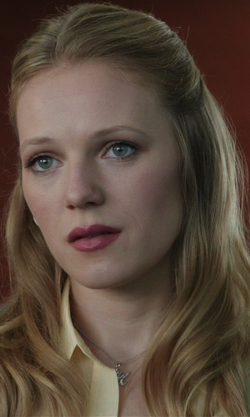 Margaret "Molly" Harper is a main character and the deuteragonist in Final Destination 5. She is the girlfriend of Sam Lawton and a survivor of the North Bay Bridge collapse. Unlike the other survivors, she was never meant to die on the bridge, and was therefore not on Death's list.

Molly was the sixth survivor of the bridge collapse to die.

Molly lived in New York, and worked at Presage Paper's local sales division. She was dating Sam Lawton, but breaks up with him so he will pursue his dream of going to Paris to be a chef. She has a Scottish accent.

Molly is on her way to a business retreat with her colleagues when Sam has a premonition that the bridge they're crossing will collapse, killing everyone on it, except for Molly who he manages to get safely across the bridge. Sam convinces Molly to leave the bridge with him shortly before it collapses as he predicted.

Days later, Molly meets with the other survivors at the memorial service. Later, Sam stops by Molly's house so they can talk, and she reveals the reason why she broke up with him was so he would pursue his dream of going to Paris to be a chef. When Sam says he turned down the job so he could be with her, she convinces him to go without her.

The next day, Molly returns to work where she shares a drink with Sam, Peter, Nathan, and Olivia. Afterwards, Sam convinces Molly to go to Paris with him. After learning about Isaac's death they rush to the Ming Yung spa where they met the mysterious William Bludworth who explains that Death is still after the survivors, and if they wish to cheat death they must kill someone else and take their remaining lifespan. Molly and Sam rush to warn Olivia who has gone to the eye doctor to treat her myopic vision, but they arrive too late.

The next morning, Molly finds Sam trying to figure out the order of how they died on the bridge, and they deduce that Nathan is going to be next. Molly and Sam rush over to find that Nathan has accidentally killed his co-worker Roy Carson in a warehouse accident. Moments later they witness the death of their boss Dennis.

Afterwards, Molly tries to convince Sam not to go to work, but Sam assures her that maybe something doesn't

want him to die, since he received the vision of the bridge collapse. Later that night, Sam reserves the restaurant for a date with Molly. An insane Peter interrupts their date, and attempts to kill Molly as he was jealous that she survived instead of Candice.

Jim Block arrives shortly after, but is shot by Peter. Nonetheless he continues to pursue Molly and Sam to remove any witnesses. Just as Peter is about to stab Molly, Sam intervenes by stabbing him in the back with a large skewer. In theory, this intervention added Molly to Death's list, since she was saved by a person on Death's list from someone who was not. However, Peter had only gotten his name erased from the list moments before. Because of that, it is entirely conceivable that Death itself would have saved Molly if Sam couldn't have done so.

Two weeks later, Molly and Sam board Flight 180 to Paris. As they take their seats, she watches Alex Browning and Carter Horton fight and get thrown off the plane with several others. When the plane takes off Sam starts seeing the same omens he saw before the bridge collapsed.

The plane then begins to break apart in mid-air, and Molly is sucked out of the side of the plane. Sam attempts to hold on to her, but when he can't hang on any longer he lets her go, and she is bisected by the horizontal stabilizer.