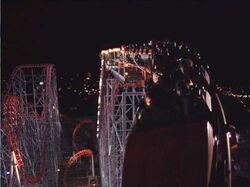 McKinley Park is an amusment park that the McKinley High School's senior trip went to. It is also the park responsible for Devil's Flight. It is the setting of the Final Destination 3 opening.

The film opens with Jason Wise, Carrie Dreyer, and Kevin Fischer on a ride called High Dive. Wendy Christensen, the school photographer, takes a picture of the three on the ride. Wendy notices that one of the lights in the picture is out, the letter 'v', making it look like "High Di e". When the ride lets the riders off, Jason playfully tackles his girlfriend, Wendy, by surprise. The four then start walking. Jason says he wants a deep fried Snickers along with a Coke, and then the four walk to the snack area for some food. At the snack area, Kevin jokingly takes a picture of Stacy's, pubic area under her skirt, to Wendy's dismay. Wendy then takes the camera from Kevin and flashes it in his face. Carrie asks Wendy to delete the picture of Stacey, and Wendy says she doubts a picture of Stacey's camel toes will make it into the yearbook. Afterwards, Kevin and Jason go to the snack bar to get the food. While they are gone, Carrie admits to Wendy that she has wanted to break up with Kevin for a while, and she will finally do it after graduation. Carrie makes Wendy promise to not tell anyone about this.

Afterwards, Wendy walks over to watch two of her other schoolmates, Ashley Freund and Ashlyn Halperin, play a water gun game. Ashley wins the game, and the two hug in celebration. Ashley wins an inflatable palm tree as a prize, and Wendy takes a picture of the two with their new palm tree.

Meanwhile, the four continue walking, and as Wendy is about to take a picture of a random dancing man, her sister Julie Christensen, and her friends Amber Regan and Perry Malinowski get in the way. Wendy tells Julie that she's not a senior, and thus, shouldn't be at the park. Julie thinks that Wendy can't do anything about it. Wendy threatens to tell their mom, and Julie says if she does that, then she's a bitch. Julie then flips off Wendy, and Wendy takes a picture of it.

Retrieved from "https://finaldestination.fandom.com/wiki/McKinley_Park?oldid=93377"
Community content is available under CC-BY-SA unless otherwise noted.