Final Destination Wiki
Register
Don't have an account?
Sign In
Advertisement
in: Characters, Ran over, Deceased,
and 19 more 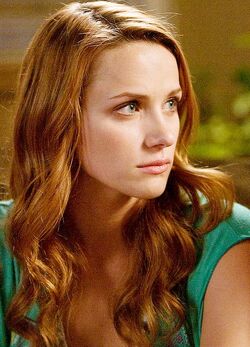 Lori Milligan is the deuteragonist and a survivor of the McKinley Speedway crash in The Final Destination.

Lori was the ninth survivor of the crash to die.

Lori lived in McKinley, Pennsylvania, where she attended college with her boyfriend Nick O'Bannon, and best friend of Janet Cunningham. She is the Irish or Scottish accent.

Lori visits the McKinley Speedway with her friends for a study break. While watching the race, Nick has a premonition of a deadly race car crash. When he panics a fight breaks out, and they all leave the stadium just moments before the accident occurs.

After the accident, Lori, Nick, Hunt and Janet go to a cafe. There, they see a news report for a memorial service being held at the McKinley Speedway, and Lori and Nick decide to go to pay their respects to the victims. At memorial service they meet George Lanter, and the racist Carter Daniels.

The next day, Lori gets a call from Janet, who informs her that Carter has died, and Lori changes the channel to watch the news report on his death. When Nick arrives, he sees this and realizes that he saw clues as to how Carter was going to die the night before. After Samantha Lane's death, Lori and Nick decide to do some research, and find out about the previous disasters. They try warn Hunt and Janet, that Death is still after them, but they don't believe them and leave.

Lori and Nick go back to the speedway to try to find out which order the survivors were meant to die in, but they are caught by George. George takes them to the security office, and tries to help Nick remember the order by showing him security footage from the accident. They find out that Andy is next and go to the mechanic shop to warn him, but he is killed. Lori, Nick and George find out that Hunt and Janet are next, and Lori and George rush to save, whole Nick rushes to save Hunt. Although Nick is unsuccessful, Lori and George manage to save Janet from being killed by a malfunctioning car wash. After saving Janet, Lori talks to George who tells her that he no longer cares whether he lives or dies.

After Lori and Nick safe proof the house, they visit George, who they find trying to

Three days later, Lori goes shopping with Janet. Afterwards, they go to see a movie, and Lori starts to see the same omens Nick saw before the speedway accident. Meanwhile, Nick has another premonition of a disastrous explosion at the mall that will kill him, Lori and Janet's and races to stop the explosion before it occurs.

Two weeks later, Lori, Nick, and Janet meet with each other at the coffee shop. While Lori and Janet talk, Nick

notices several more clues foreshadowing their deaths, and realizes that everything that they've been through was only a feint meant to lead them to where they needed to be for Death to strike. As he relays this information to Lori and Janet, a scaffold next to the coffee shop falls over and lands in the middle of the road. A truck swerves to avoid hitting it and crashes right into the coffee shop running over Nick, Lori, and Janet.

In x-ray format, Lori is thrown into a pole in the coffee shop, which twists her neck, and nearly decapitates her.