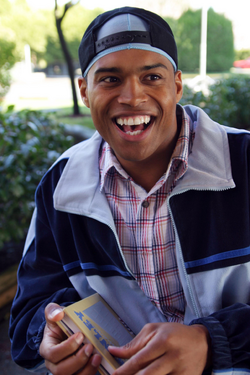 Lewis Romero was a survivor of the Devil's Flight roller coaster derailment in Final Destination 3.

Lewis was the fourth survivor of Devil's Flight to die.

Lewis lived in McKinley, Pennsylvania, and attended the fictional McKinley High School. He is the quarterback of McKinley's high school football team, and is shown to be very competitive, arrogant and loud-mouthed, which eventually comes back to bite him. Lewis is of Spanish, Italian, and African descent.

Lewis is first seen showing off his skill by playing a high striker. He later boards the Devil's Flight roller coaster. Before the ride starts, Wendy has a premonition that the ride will crash. When she panics, Lewis begins to mock her, causing a fight to erupt between him and Kevin Fischer. Lewis accidentally slapped Erin Ulmer across the face during the scuffle, causing Ian McKinley to join the fight. As a result, he is thrown off the ride, along with several other students, just moments before the ride crashes as Wendy predicted, killing the remaining passengers on board. Lewis later appears at the funeral of Ashley and Ashlyn. After the service, Lewis tells Kevin how boring it was, and that if he ever has to come to his funeral to bring him a PSP. That way, he'd "have something to do".

After Frankie's death, Wendy and Kevin visit Lewis at a gym to warn him that Death is still after them, and he is next on Death's list. Lewis rudely rebuffs them, claiming the two are seeing things because of the trauma caused by the death of their loved ones, Jason and Carrie. Wendy begins to see several signs all around the gym that were in the photo she took of Lewis at the amusement park, as Lewis works out at a bow-flex machine and rants about his future football career, as well as mocking Death to the point where he believes that Death actually fears him.

In the midst of the rant, a weight-lifter knocks the claw off a bear statue, which hits another weight lifter in the eye, and causes him to drop his weight-lifting bar. The force of the weights cause two staggering swords above the bow-flex machine to fall and cut through the wires that were holding the weights up, unbeknownst to Lewis and the others. Disbelieving that he was destined to die, and technically challenging Death, Lewis lifts the weights once again, which swing down and crush his head, spraying blood on Wendy and Kevin.

Wendy and Kevin walk into the gym, Lewis exclaims "Fisher, what the f**k are you doin' here?" then the weights crush his head instantly.