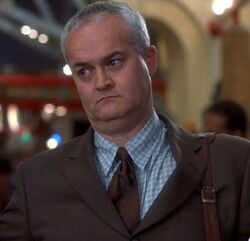 Larry Murnau is a character in the film Final Destination. He is a high school French teacher and one of the casualties aboard Flight 180.

Larry was resided in Mt. Abraham New York. He was the lead French teacher going onto the flight, along with his colleague Ms. Lewton. Larry usually shouted out various French sentences and fragments to his students, but as always, only a few (such as Clear Rivers) responded to his questions.

Larry handed all his students their tickets and boarded the plane with them as well. As he sat on the plane, he exclaimed "Attention! Notre voyage commence!" ("Attention! Our trip is beginning!"), causing everybody to cheer in joy. Suddenly, the plane began to malfunction and soon exploded, killing him.

However, this turned out as Alex's premonition.

After Alex and several other students are kicked off the plane, Larry gets off and tries to calm down the group. His partner Ms. Lewton tells him only one of the teachers can get back on. Although Larry offers to stay behind, Ms. Lewton tells him to go because he knows French a lot more than she does. Like Alex predicted, the plane exploded, and Larry was one of the fatalities.

Larry Murnau is seen in Final Destination 5. Along with Ms. Lewton, Billy, Carter, Terry, Tod, George and Alex that are seen being thrown off of Flight 180 when Alex predicts it will explode. The group of arguing students pass by the seats of Sam Lawton and Molly Harper, who also died with Murnau in the subsequent takeoff and explosion.