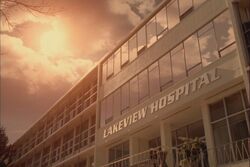 Lakeview Hospital is a hospital were an explosion occured in Final Destination 2.

How the explosion occurred

In Eugene Dix's hospital room, the air vents closed and two oxygen tanks start leaking. Eugene's life support machine then starts to roll across the room, pulling its plug nearly out of the socket. When Clear Rivers opens the door, it knocks the plug out of the socket. The socket creates a spark. Since the room is full of oxygen, an explosion is created, incinerating Eugene, Clear, and a hospital orderly.

Death toll: 3 (a number of others)

Retrieved from "https://finaldestination.fandom.com/wiki/Lakeview_Hospital?oldid=93189"
Community content is available under CC-BY-SA unless otherwise noted.