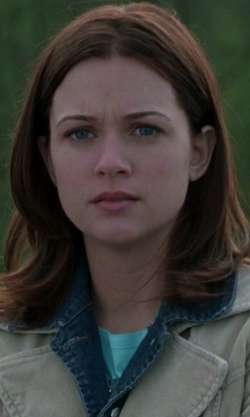 Kimberly Corman is the protagonist of Final Destination 2 and a visionary who foresaw the Route 23 pileup. She is also first visionary in the whole series to successfully cheat Death.

Kimberly was born in June 9, 1982 in White Plains, New York to Michael Corman. She is very close to her father, especially after her mother's death during a carjacking at a shopping mall. Kimberly continues to blame herself for what happened since she stayed behind to watch a news feed on Tod Waggner's death, while her mother was killed.

Kimberly attended college with her friends Shaina McKlank, Dano Estevez and Frankie Whitman, and was originally going to spend her spring break with her friends in Daytona Beach, Florida. She is shown to be an irritably overprotective and interfering control freak.

Kimberly decides to take Route 23 for the road trip to Daytona Beach. Before entering the highway, Kimberly has an ominous vision of a highway pile-up caused by a log truck. She rudely and cowardly parks her car on the on ramp to prevent other drivers from entering the highway. Moments later she and the other drivers watch as the pile-up occurs. To her surprise, a truck smashes into her SUV, killing her friends. Afterwards, Kimberly and other survivors are interrogated by Officer Burke at the police station. There, Kimberly explains the similarities between her vision and Alex Browning's, and expresses her fear that Death will still be after the survivors.

The survivors disregard her theory, until survivor Evan Lewis dies in his apartment later that day. Kimberly and Thomas consult the help of Clear Rivers, the only survivor of Flight 180 to save the remaining survivors of the pile-up. Clear leads Kimberly and Thomas to mortician William Bludworth, who claims that only new life can defeat Death. Kimberly concludes that if pregnant survivor Isabella Hudson has her baby it will ruin Death's plan and they will all be safe.

The other survivors reunite at Thomas's apartment to look after one another until Isabella has her baby. After Nora Carpenter's death, the others leave to find Isabella. Along the way their van's tire suffers a blow out and they crash onto a nearby farm.

After Eugene Dix is rushed to the hospital, Kat Jennings and Rory Peters each meet their demise. Kimberly, Thomas, and Clear rush to the hospital, and Kimberly has another vision that Dr. Kalarjian will strangle Isabella. After Thomas immobilises Dr. Kalarjian, they see Isabella give birth and believe they have cheated Death.

However, after Kimberly has another vision of someone with bloody hands in a submerging van, she realises that Isabella was not on Death's list. After Eugene and Clear are killed in an explosion (which nearly also kills Burke until Kimberly intervenes by pushing him out of the way), Kimberly decides to sacrifice herself for Thomas sake by driving a van into a lake.

Thomas manages to rescue her and she is resuscitated by Dr. Kalarjian, thus granting her "New Life". Sometime later she and Thomas go to a picnic with the Gibbons family, who tells them that if it wasn't for Rory their son Brian would be dead. To everyone's surprise, Brian is blown to pieces by a malfunctioning barbecue grill moments later.

Five years later, Kimberly went to a hardware store to ask for directions, where she encountered Burke. As they greeted each other, an unmanned vehicle began to drive down the road until it crashed into the store, nearly killing Kimberly and Burke. They rushed outside the back door at the last minute only to come into contact with a wood chipper, Kimberly got her coat caught inside the machine and was slowly sucked in. Burke tried to save Kimberly, but in the process, he got caught in the machine as well.

The Associated Press eventually detailed the circumstances of her death in an obituary. The full text of the article, which is also accessible in the DVD version of Final Destination 3, is presented below.

The scene that reveals their deaths is only featured as an optional part of the Choose Their Fates special feature on the "Thrill Ride DVD Edition" of Final Destination 3, that allows the viewer to choose between variations of scenes playing out, which can result in a substantially different viewing experience. It was not featured in the theatrical cut of the film and is generally considered to be non-canonical, though producer Craig Perry has said that the scene 'can be canon'.