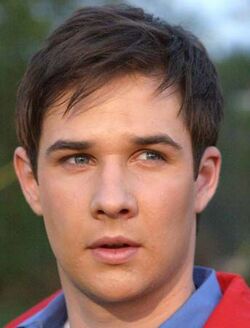 Kevin Fischer is a survivor of the Devil's Flight roller coaster derailment in Final Destination 3.

It is unknown if Kevin is still alive. If he died, he would have been the ninth survivor of the derailment to die.

Kevin lived in McKinley, Pennsylvania,and attended McKinley High School. He was best friends with Jason Wise and was dating Carrie Dreyer who he planned to propose to after graduation. Unbeknownst to him she planned on breaking up with him after graduation. Kevin is of German descent.

Kevin visited the carnival for his senior class field trip with his girlfriend Carrie, best friend Jason, and Jason's girlfriend Wendy. When they board the Devil's Flight roller coaster, Wendy has a premonition that the ride will crash, killing everyone on board. When she panics a fight ensues between Kevin and fellow classmate Lewis Romero. As a result, they are thrown off the ride along with several others, shortly before the ride crashes as Wendy predicted, killing the remaining passengers, including Carrie and Jason. After the deaths of Carrie and Jason, Kevin tells Wendy about Flight 180 and how the survivors will die just as they did, but she refuses to listen to him and drives off. Following Ashley and Ashlyn's death, Wendy and Kevin begin to try to save the others. They are almost killed by a runaway truck at a drive-through, but they escape just in time, and witness Frankie Cheeks' demise. They fail to save Lewis and Erin, but they manage to save Ian Mckinley When Wendy discovers that her sister Julie was also on the roller coaster she informs Kevin who manages to save her as well. Although the person who was sitting sitting next to her on the roller coaster Perry is killed moments later. Kevin is almost killed by a grill explosion, but Wendy and Julie save him just in time. Following these events they are confronted by Ian. Suddenly a cart of fireworks go off in their direction, but Kevin, Wendy and Julie duck, and they hit a nearby cherry picker instead, which falls and crushes Ian, leading the others to believe they are safe.

Five months later, Kevin encounters Wendy and Julie on a subway train, while on his way to a football game. Suddenly, Wendy has another premonition, of the subway derailing. In the premonition, Kevin is thrown against a cracked window and is unable to move as it slowly grows weaker. The window finally breaks and Kevin is jettisoned outside, and violently ground between the train and tunnel wall.

However, this is revealed to be another one of Wendy's premonition, and the three attempt to stop the train but to no avail. The screen then cuts to black as the disaster begins to happen, leaving his fate unknown.

Retrieved from "https://finaldestination.fandom.com/wiki/Kevin_Fischer?oldid=94482"
Community content is available under CC-BY-SA unless otherwise noted.