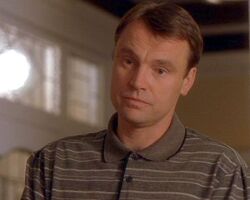 Kenneth "Ken" Browning is the father of Alex Browning and the husband of Barbara Browning.

He first appears when Alex is packing his stuff to go to the airport, then he comes to the airport to pick up Alex after Flight 180 blew up and drops Clear at her home. He later appears at the memorial at Alex's school and talking to Clear on the phone.

Retrieved from "https://finaldestination.fandom.com/wiki/Ken_Browning?oldid=78664"
Community content is available under CC-BY-SA unless otherwise noted.