Final Destination Wiki
Register
Don't have an account?
Sign In
Advertisement
in: Characters, Fourth Survivor to Die, Females,
and 15 more 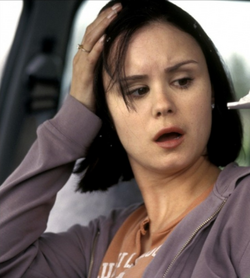 Katherine "Kat" Jennings is a main character in Final Destination 2 and is a survivor of the Route 23 highway pileup. She is a business woman who survived the pileup.

Kat is the fourth survivor of Route 23 to die.

Kat resides somewhere in New York. Kat works as a marketing consultant for a business firm. Kat had a successful career as well as her relationship with her partner; however, she proves to be repulsive and short-tempered towards her associates and companions. Prior to the crash, Kat was supposed to meet with a client at a bed and breakfast via bus when suddenly the bus hits Terry Chaney, disgusting Kat and sparing her from suffering from suffocation during a gas leak in the lodge.

Kat was driving her car on Route 23 and talking on the phone, when suddenly Dano Estevez throws his weed at her windshield. Kat quietly asks if it was him. After Kimberly sees a premonition that a huge pile-up will occur, she blocks traffic and stopped others from getting on the road, including Kat who complains about the inconvinience. Abruptly the crash happened just like Kimberly predicted, killing 18 people. m

Later Kat was interrogated with the other survivors at the police station, where she learned about Flight 180. After returning home, she learned another survivor was dead while watching the news. The next day. she went to Burke's apartment like the others, Kimberly and Clear warn them that they are in danger. But Kat jokes that she will die after Nora and goes outside to smoke. Her attitude changes after witnessing Nora's brutal death, and a horrified Kat asked if they could find the pregnant woman now.

Kat is driving herself, Clear, Kimberly, Eugene, Thomas, and Rory to the hospital, when a tire bursts and her car goes skidding off the road and through a load of metal poles, which causes a long PVC pipe to propelled through Kat's headrest, although Kat is not harmed. Everyone is fine except Eugene, who has a collapsed lung which puts him in the hospital. Everyone gets out of the car except Kat, who has been wedged in the car by a huge log.

As the rescue crew are trying to get her out of the car, Kat begins smoking. She asks a rescue worker to be quieter with the jaws of life, causing the bemused man to ram it into the car extra hard, which accidentally causes the airbag to deploy. The force pushes Kat's head back onto the pipe, and as the airbag deflates the rescue worker realizes that he accidentally killed her. Her cigarette drops out of her hand into the fuel leakage, instigating a chain reaction of Rory's death.