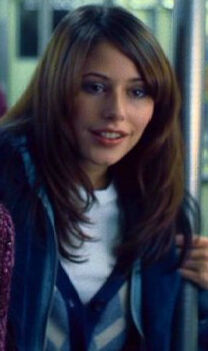 Juliette "Julie" Christensen is the sister of Wendy Christensen and a survivor of the Devil's Flight roller coaster derailment in Final Destination 3.

It is unknown if Julie is still alive. If she died, she would have been the eight survivor of the derailment to die.

Julie lived in McKinley, Pennsylvania, with her sister Wendy, and attended McKinley High School. She is best friends with Perry Malinowski and Amber Regan.

Julie attended the carnival for McKinley's grad night (despite being a sophomore), and boarded the Devil's Flight roller-coaster. Before the ride starts, Wendy has a premonition that the ride will crash, killing everyone on board. When she panics a fight breaks out, and several people leave the ride including Julie. Moments later, the ride crashes as Wendy predicted, killing the remaining passengers on board.

Later Julie and Wendy talked about their parents, while Wendy was looking at the photos. Later in the film, Wendy finds out that Julie was on the roller-coaster as well and is next on Death's list. During the tricentennial celebration, Kevin tracks down Julie and she flips him off. Suddenly, a horse comes out of nowhere and a rope attached to the horse wraps around

Julie's neck, dragging her around the fair, and almost impaling her on a harrow. However, Kevin manages to save her at the last second when he cuts the rope with a sword. Short afterwards, she witnesses her friend Perry's death by getting impaled with an airborne flagpole and then Ian McKinley crushed by a falling cherry picker.

Five months later, Julie encounters Wendy and Kevin on a subway train, because her father's car breaks down and she didn't feel like waiting for him to get it repaired. Suddenly, Wendy has another premonition that the train will derail. During the derailment, a stray wheel slams into Julie, ejecting her out of the train, and killing her instantly.

When Wendy realizes this was just a premonition the three attempt to stop the train, but to no avail. The screen then cuts to black as the train crash occurs, leaving her fate unknown.