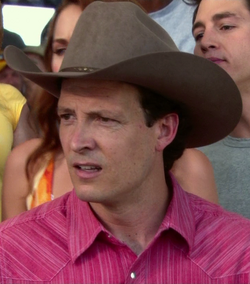 Jonathan Groves is a character in The Final Destination and a survivor of the McKinley Speedway accident. He is a modern day cowboy.

He was the sixth survivor of the McKinley Speedway crash to die.

Jonathan was resided in McKinley, Pennsylvania and he was a modern day cowboy. He was shown to be more calm and a bit responsible. He attended the McKinley Speedway to watch a race.

Jonathan attends a race at McKinley Speedway, where he sits in front Nick O'Bannon and his friends Lori Milligan, Janet Cunnigham and Hunt Wynorski. After Nick, his friends and several others leave (due to Nick making a scene after having a vision of a crash) Jonathan is caught in the disaster.

In Nick's vision, Jonathan, realizing his height and hat were blocking Lori's view of the race, offered to move to another seat, which led to his death. Since Jonathan never needed to move due to Lori leaving, he was only injured when the car crash actually occurred.

Dug out of the rubble and taken to a hospital, Jonathan is listed as a John Doe, until his family manages to get in touch with him.

In the hospital, one of the orderlies left a tub running on the floor above Jonathan's and it slowly began to overflow and spill water all over the floor. The roof of Jonathan's floor began to leak water and a wounded Jonathan tried to call for help. Some of the water got on the help button and rendered it useless.

Jonathan painfully got out of bed and slid his way across the floor as the room began to fill up with water. Suddenly, Nick and George showed up in an attempt to rescue Jonathan. Just as they were about to, the tub on the floor above him fell through the roof and right on top of Jonathan, crushing him to death.

Retrieved from "https://finaldestination.fandom.com/wiki/Jonathan_Groves?oldid=94416"
Community content is available under CC-BY-SA unless otherwise noted.