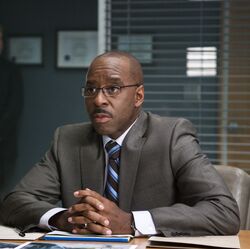 Agent James "Jim" Block is an FBI Agent in Final Destination 5. He distrusts Sam Lawton's claim of his premonition, and keeps a close eye on the surviving group.

Jim Block lives in New York. He is wise and trustworthy. He was an FBI Agent who work for the Federal Bureau of Investigation and he was also the one who assigned to investigate the case of Sam and his friends, although he finds all the accidents are hard to believe.

Agent Block appears and interrogates the survivors after the bridge collapse. He keeps in contact with the survivors' boss, Dennis Lapman, so he can monitor any suspicious or violent behavior in them. He is present after Candice's death, raising his suspicion of Sam, believing the accidents to be premeditated. He is also seen investigating her crime scene but none of the investigators are able to explain how such an accident could happen in the first place.

When Block is talking to Sam and Molly after Olivia died, Block starts to believe them about the incidents but left speechless when Sam and Molly told him that they were suppose to die in the bridge and that Death is after them.

When Peter Friedkin attempts to kill Sam Lawton and Molly Harper at Le Cafe Miro 81, he fires off shots with his gun which are heard by Agent Jim Block. He requests backup and investigates, only to be shot and killed by Peter. The characters believe Peter now has stolen the lifespan of Agent Block since Peter was not meant to be alive to kill him. That life is later passed on to Sam after Peter's death.