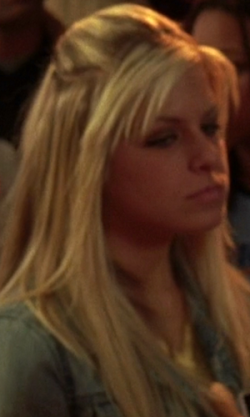 Jill is a character in Final Destination 3. She is also one of the casualties of Devil's Flight derailment.

Jill was the third casualty of the Devil's Flight derailment to die.

After witnessing the horrible premonition, Wendy freaks out and forces the operators to let her off. A large fight ensues and several riders manage to get off. However Marcus and Jill stay on. Despite several attempts to stop the roller-coaster, Wendy is unable to do so and it crashes just as she predicted. Jill is among those who flies off to her death when the coaster detaches.

Retrieved from "https://finaldestination.fandom.com/wiki/Jill?oldid=93321"
Community content is available under CC-BY-SA unless otherwise noted.