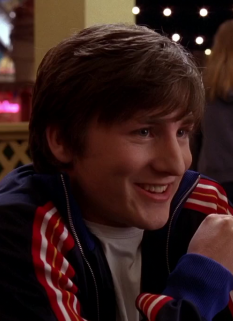 Jason Robert Wise a character in Final Destination 3. He was the boyfriend of Wendy Christensen and best friend of Kevin Fischer. He was also a casualty of the Devil's Flight roller coaster crash.

Jason lived in McKinley, Pennsylvania, and attended McKinley high school. He was in a relationship with Wendy Christensen, and is also best friends with Kevin Fischer, although he is shown to be more kind and considerate towards Wendy than his other friends.

Jason visits the carnival with Wendy, Kevin, and Kevin's girlfriend Carrie for their senior class field trip. Before boarding the Devil's Flight roller coaster, Wendy becomes nervous about the ride. Jason tries to comfort her by telling her that her fear is coming from the sense of having no control, and she is just imagining stuffs.

After she is taken outside, Wendy witnesses the roller coaster derail crash, and watches helplessly as Jason falls to his death.

Retrieved from "https://finaldestination.fandom.com/wiki/Jason_Wise?oldid=94011"
Community content is available under CC-BY-SA unless otherwise noted.