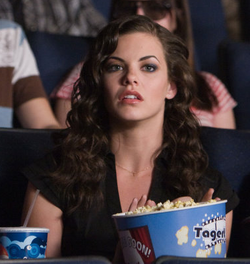 Janette "Janet" Cunningham is a main character and a survivor in of the McKinley Speedway crash in The Final Destination.

Janet was the eighth survivor of the crash to die.

Janet lived in McKinley, Pennsylvania, where she attended college with her best friend Lori Milligan, and ex-boyfriend Hunt Wynorski. Of all the survivors she seems to be the most affected by the accident.

Janet visits the McKinley Speedway with her friends for a study break, instead of going to the movies like she wanted to. While watching the race, Nick has a premonition of a deadly car crash. When he panics, a fight breaks out and they leave just moments before the accident occurs.

After the accident, Janet goes to a cafe with Hunt, Lori and Nick, still shocked over the accident. There, they see a news report on the memorial service being held at the speedway, but Janet refuses to go back. The next day, Janet watches a news report on Carter Daniel's death, and contacts Lori to tell her what happened. After Samantha Lane's death, Nick and Lori try to warn Janet and Hunt that Death is still after them.

The next day, Janet goes to the car wash, and is nearly obliterated by a rotating brush when the car wash malfunctions, but Lori and George arrive just in time to save her.

There days later, Janet goes shopping with Lori, and afterwards they go to the mall cinema. When Lori begins to see the same omens that Nick saw before the speedway accident she tries to warn Janet, but Janet refuses to listen to her. Meanwhile, Nick has another premonition of a disasterous mall explosion that will kill all three of them, and races to the mall to stop it before it occurs

Two weeks later, Janet, Lori and Nick meet up at the cafe

While Janet and Lori talk, Nick starts to see several more clues foreshadowing their deaths and realizes that everything they've been through was only a feint, meant to lead them to where they needed to be for Death to strike. As he relays this information to Janet and Lori, a scaffold prop next to the coffee shop falls over, and lands in the middle of the road. A truck swerves to avoid hitting it, and crashes right into the coffee shop, running over Nick, Lori, and Janet.

In x-ray format, Janet is crushed underneath the truck's tire, snapping her spine and ribcage.