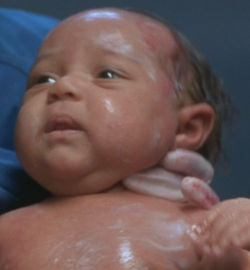 This infant was the son of Isabella and Marcus Hudson. While unborn, he survived the Route 23 pile-up with his mother, who was pregnant with him at the time.

Not much is known about Isabella's son, let alone his name. It is presumed, however, that he carries his mother's maiden name, as Isabella had separated from Marcus before the massive car accident.

Despite his survival, neither he nor his mother were meant to die in the Route 23 catastrophe, and therefore, they are not on Death's list.

Retrieved from "https://finaldestination.fandom.com/wiki/Isabella_Hudson%27s_son?oldid=92174"
Community content is available under CC-BY-SA unless otherwise noted.