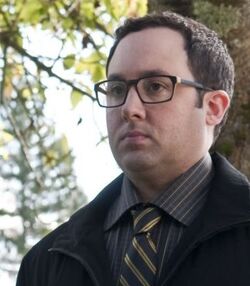 Isaac Palmer is a main character in Final Destination 5 and is a survivor of the North Bay Bridge collapse. He is a coworker of Presage Paper and a womanizer.

Isaac was the second survivor to die.

Isaac was resided in New York. He works at Presage Paper as a Tech Support. He is smart but sly, and somewhat shady. He is revealed to be a pervert, a womanizer and a thief. He is one of the employees qualified to go on the company's corporate retreat.

Later Isaac is on his way to a business retreat with his colleagues when Sam Lawton has a premonition that the bridge they're crossing will collapse, killing everyone on it. When Sam panics, a confused Isaac leaves the bus before the bridge collapses as Sam predicted.

After the accident, Isaac and the other survivors attended the memorial service for the victims. When Isaac returns to the office while he raids the desks of his deceased co-workers, and finds a coupon for a free therapy session at a Chinese spa.

When he arrives at the Ming Yun Spa, he sexually harasses the young, attractive receptionist. Disgusted, she decides to take him to receive acupuncture from an old, unattractive woman in a room full of candles and incense. When he walks in, he rubs a Budai statue sitting on a shelf on the wall for good luck. His cell phone, which he uses to call multiple women, is taken from him by the masseuse and placed on a shelf next to a lit candle. The masseuse performs rough, violent body massage techniques on Isaac, which causes the bolts on the leg of the table he is laying on to give way. After the masseuse finishes the acupuncture on him, she leaves him to sleep for thirty minutes.

One of the coals from the burning incense crumbles off and falls onto a piece of parchment below, setting it

aflame. Isaac sees this, and in a panic stumbles off the table, causing the legs to give way, sending him to the floor face down, driving the acupuncture needles painfully but non-fatally into his body. A large bottle of alcohol is knocked over and covers him and the floor. Isaac gets up painfully, with the needles stuck into his body and face, and tries to pull one out. During this distraction, Isaac's cell phone begins to vibrate, slowly moving the candle next to it off the shelf and into the alcohol. The alcohol is set ablaze and Isaac stumbles into the far wall of the room, however the fire stops just short of him. As he whimpers in relief, the shelf above him holding one of the Budai statues gives way and it crushes his head into pulp.