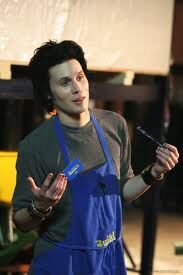 Ian McKinley is a survivor of the Devil's Flight roller coaster derailment in Final Destination 3, where he later served as the films secondary antagonist. He was a school Goth and the boyfriend of Erin Ulmer.

Ian was the seventh survivor to die.

Ian lived in McKinley, Pennsylvania, and attended the fictional McKinley High School. Like his girlfriend Erin, he is shown to be very intelligent. Him and Erin also work together at the local 'Build It‘store.

Ian attended the carnival with Erin for their senior class field trip. They both boarded the Devil's Flight roller-coaster, but before the ride started fellow classmate Wendy Christensen had a vision that the ride would crash, killing everyone on board. When she panics a fight ensues between Lewis Romero and Kevin Fischer. When Lewis accidentally slaps Erin in the face, Ian gets involved as well, and they are all thrown off the ride, shortly before the ride crashes as Wendy predicted.

Weeks later he appears at the school, signing yearbooks with Erin, when they see a somber Wendy walking alone in the rain. He and Erin laugh a little when they see Ashley and Ashlyn try to invite Wendy to Yuri's tanning salon.

After Ashley and Ashlyn are incinerated in malfunctioning tanning beds, he appears at their funeral. He makes a scene in front of the other guests when the minister says "We are all equal in Death's eyes" , before being lead to his car by Lewis and Kevin.

After Lewis and Frankie's deaths, Wendy and Kevin go to the Build it hardware store, and try to warn Ian and Erin that Death is still after them and they are next on Death's list, but they are very skeptical and sarcastic.

Ian brings up a theory that if the last survivor were to kill themselves, it would ruin Death's plan and save everyone else on the list. Afterwards, he is nearly impaled by a falling stack of plywood. Wendy manages to push him out of the way at the last second, but Death immediately skips him and goes to Erin, who is shot in the back of the head with a nail gun. This leaves Ian devastated and causes him to resent Wendy, who he blames for Erin's death.

Ian follows Wendy to McKinley's tricentennial fair. During the celebration, Ian confronts Kevin, Wendy and Julie, believing that he will be the cause of Wendy's death. Wendy tells Ian that if he doesn't kill her, it will ruin Death's plan and they will all be safe. However, since Ian's has already been skipped, he doesn't care, and still plans to kill her. Before he can do so, a set of fireworks go off in their direction and barely miss Ian,

Ian looks up at the falling sign for a few seconds later, before it falls on him and brutally crushes him in half. The surviving half of his body is seen lying on the ground in a pool of blood, and his middle finger slightly twitches to Wendy before succumbing from blood loss.