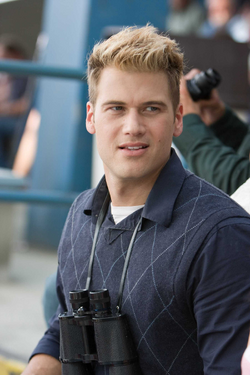 Hunt Wynorski is a main character in The Final Destination and is a survivor of the McKinley Speedway crash.

He was the fifth survivor of the crash to die.

Hunt lived in McKinley, Pennsylvania, where he attended college with his best friend Nick O'Bannon, and ex-girlfriend Janet Cunningham. He is shown to be very obnoxious and insensitive.

Hunt visits the McKinley Speedway with his friends for a study break. While watching the race, He says he paid to see a crash. He asks Nick which drink is in his binoculars. He guesses wrong and seconds later Andy Kewzer turns to Hunt and asks if his girfriend could use his binoculars. Hunt tries to explain they were not binoculars at all, but Nadia takes them and drinks from it. Hunt says she can drink as much as she wants. Later a mother tries to put tampons in her sons ears, and Hunt points laughs.

When Nick has a premonition that a crash will occur, he panics and a fight breaks out. Hunt follows them outside, and moments later Nadia Monroy dies when a flying tire obliterates her upper-body when the accident actually does occur. The next day, Hunt and his friends go to a cafe. While discussing what happened, Janet asks why they were spared, and Hunt credits his lucky coin for their survival. After seeing a news report for the memorial service, Nick and Lori decide to go, but Hunt and Janet refuse. Lori says the least they can do is show their respect to the people who lost their lives, and Hunt says ''What people? The people who didn't have Dr. Xavier to tell them to get out of the way? people who don't have one of these?'', showing his coin, and Nick says to put it down .

After the deaths of Carter Daniels and Samantha Lane, Nick and Lori try to warn Hunt and Janet that Death is still after them, but Hunt doesn't believe them. He says that if he is really going to die then he is going to try to get laid first. But before leaving he promises to check on Janet. He then went to a country club.

After Andy Kewzer's death, Nick receives visions of water, and tries to warn Hunt who is at a country club pool. While at the pool, Hunt answers a phone call from Nick, but a kid squirts him with a water gun and messes up his phone. Hunt gets mad and takes the water gun, which he places on the pool's control box. When the gun falls it hits a lever controlling the pool drain, and the drain starts sucking up the water. While relaxing by the pool, someone in the adjacent field hits a golf ball, which hits Hunt, and causes him to drop his lucky coin, which rolls into the pool and is sucked down the drain.

Hunt dives in the pool to find his coin, but is sucked in by the drain as well. Unable to move, Hunt lies underwater screaming for help as the draining pressure increases, until the drain finally sucks his organs out through his anus. His organs are then shot out from a poolside pump, along with his lucky coin.