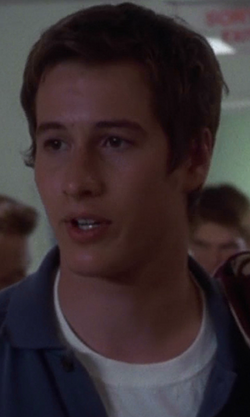 George Waggner is a character in the film Final Destination. He is a high school student and one of the casualties aboard the ill-fated aircraft, Flight 180.

George resided in the town of Mt. Abraham, New York with his parents, Jerry and Linda Waggner, and his younger brother, Tod Waggner. He and Tod had been friends with Alex Browning since childhood, and they had been classmates through high school since then. He was studying at Mt. Abraham High, and was one of the students qualified to travel to Paris, France for the school's annual field trip. He is very serious, rude and barely conceited. He was also a high school jock and part of Mt. Abraham football team with Carter Horton and Dustin.

George and his brother Tod is always bickered with each other and he made fun of Tod. George took the cash their father gave them as a surprise and didn't share any with Tod, which sparked a small fight broken up by Ms. Lewton. Later, while getting on the plane and seeing a crying baby, George makes a remark saying, "It'd take a fucked-up God to bring down this plane." As he sat on the plane, it began to malfunction and exploded, killing him.

However, this hasn't really happened yet, it was only in Alex's premonition.

As Alex begins to freak out about the plane exploding and gets thrown off, George tells his brother Tod to go check up on him. Tod agrees, while George stays on the flight. Just as Alex predicted, it exploded and George was killed with the others.

His death started the anger of the Waggner household towards Alex.

George is seen briefly in the the events of Final Destination 5 before the Flight 180 explosion.