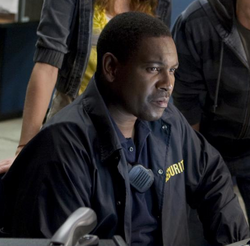 George Lanter is a main character survivor of the McKinley Speedway disaster in The Final Destination.

He was the seventh survivor to die after the accident.

George lived in McKinley, Pennsylvania, and worked as a security guard at the McKinley Speedway. Prior to the accident George was an alcoholic, who accidentally killed his family in a car accident, because he was driving under the influence. Because of this George carries around a lot of guilt and has suicidal thoughts. Of all the survivors George is the kindest, and most helpful towards Nick and Lori.

George was working at the McKinley Speedway in the stands the day of the crash. Before the premonition, George tells Carter to put his foot down as he is blocking the isle. When Nick has his premonition about a car crash and begins to panic, George follows him out the stadium and tries to calm him down. As George questions Nick on what crash he is referring to, the disaster really happens just like in Nick's premonition and Nadia Monroy is obliterated by a stray tire that flies out of the stadium moments later.

George later appears to Nick and Lori at the memorial service. He asks Nick how he knew the disaster was gonna happen, before Carter confronts him. He blames George for the death of his wife, who was among the casualties in the disaster, and mocks him before leaving. Later, while George is talking to his mom in his home, he witnesses Carter being dragged by his tow truck on fire before it explodes.

Later, George catches Nick and Lori at the speedway as they are trying to find out which survivor is next. He helps them find out that Andy is next on death's list by showing them security footage from the accident. They visit the autoshop, where Andy is working, and outside, George talks to the grieving Andy about losing his family before he is killed.

They then realize that Hunt and Janet are next. After George and Lori save Janet from a malfunctioning car wash George tells her that he will accept his death because of his families' accident.

That night George attempts to commit suicide but is unable to do so. Nick and Lori find him as he attempts to hang himself. Lori says that saving Janet must have defeated Death and they all celebrate.

However, days later, Nick sees a news report on Jonathan Groves, who survived at the speedway and is in a coma. Nick contacts George to find Jonathan, and they met at the hospital, but they arrive too late as he is crushed by an overfilled bathtub that crashed through the ceiling from the room above.

After an unsuccessful attempt at rescuing Jonathan from the hospital, George and Nick walked outside to find Lori and Janet. As they were walking, an ambulance sped down the road and hit George at full speed, completely obliterating him. Nick experienced a premonition of this just seconds before but was too late to prevent it.