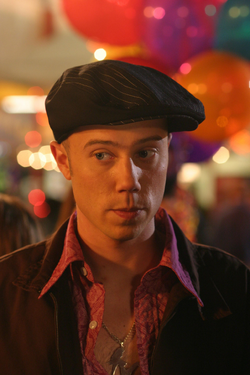 Franklin R. Cheeks was a survivor of the Devil's Flight roller coaster derailment in Final Destination 3.

Frankie was the third survivor to die.

Frankie lived in McKinley, Pennsylvania. Although he had already graduated from McKinley High School, he continued to sexually harass the students, including Ashley Freund and Ashlyn Halperin.

Frankie is first seen recording Ashley and Ashlyn while they play one of the games at the carnival. He then follows them to the Devil's Flight roller coaster, and continues to harass them while they stand in line. He sits behind them when they board the roller coaster, so he can record them with his hand held camera.

After Wendy has a premonition that the roller coaster will crash, she begins to freak out, causing a huge fight to break out between Kevin Fischer, Lewis Romero, and Ian McKinley. Ashley and Ashlyn get irritated and leave, and Frankie follows them off the ride shortly before it crashes as Wendy predicted, killing the remaining passengers on board. After Ashley and Ashlyn are incinerated by malfunctioning tanning beds, Frankie attends their funeral, where he tells Julie that he blames himself for their deaths, because if it wasn't for him they wouldn't have felt the pressure to look so good. He then tries to kiss Julie but she smacks him across the face.

After the funeral, Wendy and Kevin go to a drive-thru fast food restaurant. Suddenly a runaway trucks starts rolling down a sloped road towards Wendy and Kevin, but they are trapped by an SUV behind them, and a Hice Pale Ale truck which backs up too close to the right side of Kevin's truck. Kevin continues to honk his horn to warn the man in front of them, but the man flips them off. The SUV behind them finally backs up, but the truck is already to close, and Kevin is forced to kick out his front windshield so he and Wendy can escape.

When the truck rams into Kevin's truck the engine shoots out and the cooling fan located in the front slices off the back of the man's head. When Wendy and Kevin investigate they discover the man in front of them was actually Frankie. The fan spins one last time, spreading Frankie's brains everywhere, as Wendy and Kevin watch in horror.

Retrieved from "https://finaldestination.fandom.com/wiki/Frankie_Cheeks?oldid=93966"
Community content is available under CC-BY-SA unless otherwise noted.